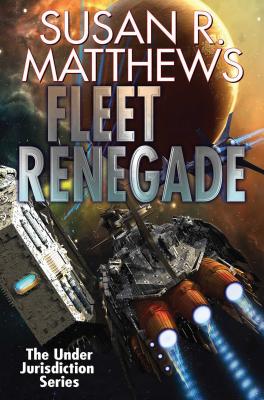 This is book number 2 in the Under Jurisdiction series.

Hour of Judgment
Burkhayden is a subject colony, leased by the Bench to a Dolgorukij familial corporation for economic exploitation. When a Nurail woman from the service house is brutally raped and beaten, Andrej Koscuisko –- Ship’s Inquisitor on board the Jurisdiction Fleet Ship Ragnarok –- is called upon to render services under contract. Before one fateful night is out Andrej Koscuisko will put himself under sentence of death by doing what he realizes at last he should have done from the beginning.

And Port Burkhayden will burn.

The Devil and Deep Space
Andrej Koscuisko, the Ragnarok’s Ship's Inquisitor, is going home on leave. His ship of assignment is participating in training exercises, and when an observer station unexpectedly explodes. Andrej will have to fight Fleet itself to bring the Ragnarok the only thing that can save the ship and crew from destruction –- a single piece of evidence with the potential to change the course of the history of Jurisdiction Space forever.

Warring States
Chilleau Judiciary’s senior administrative officer has been murdered in the very heart of Chambers. Bench Intelligence Specialist Jils Ivers has been unable to ferret out the perpetrator, and that means she’s the Bench’s prime candidate for execution –- so that justice may be seen to have been done, whether or not she is guilty.

Andrej Koscuisko means to take this opportunity to execute a daring theft. And if he is successful, the rule of Law will be rocked to its very core, and the fundamental nature of the Bench will be changed forever.

About Fleet Renegade:
"Starting with An Exchange of Hostages, I devoured Susan R. Matthews 'Koscuisko' novels—all six of them—when they first appeared.  Books with this much courage, clarity, and empathy are rare. The Under Jurisdiction series is a remarkable and unprecedented accomplishment.”—Stephen R. Donaldson, New York Times best-selling author of the Thomas Covenant series.

Susan R. Matthews was raised in a military family and spent her younger years living around the globe in a myriad of places including Germany, both coasts of the U.S., and India. Often cut off from television and other media, she read voraciously. Her first encounters with science fiction came via classics such as I, Robot and Stranger in a Strange Land. Matthews' debut novel, An Exchange of Hostages, the first entry in her critically acclaimed Under Jurisdiction series, was nominated for the Philip K. Dick Award. Matthews was also a finalist for the John W. Campbell award for best new writer. There are now seven novels in the Under Jurisdiction series. The first six are collected in two omnibus editions: Fleet Inquisitor and upcoming Fleet Renegade. The newest entry in the series is Blood Enemies, published by Baen Books. Matthews lives in Seattle with her wife, Maggie, and two delightful dogs. She is a veteran of the U.S. Army, where she served as operations and security officer of a combat support hospital. She is also an avid HAM radio operator.