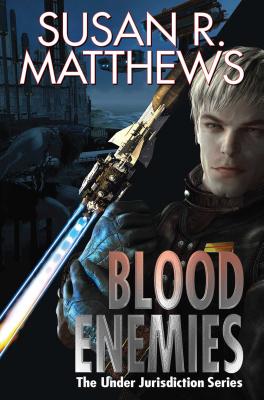 This is book number 7 in the Under Jurisdiction series.

A NEW ENTRY IN THE LEGENDARY, CRITICALLY ACCLAIMED UNDER JURISDICTION SERIES!

TO END A GENOCIDAL MENACE, A RETIRED TORTURER MUST AGAIN TAKE UP HIS HATED TRADE

Andrej Koscuisko is a former Fleet Medical Officer for the enormous totalitarian star empire, the Jurisdiction. But when he served in the Fleet, Andrej’s real job was not medicine, at least not primarily medicine, but to act as a torturer of prisoners, whether they had information to give or not. To help him in his duties, Andrej was attended by “bond involuntaries”—slaves—men he’d come to look upon as friends and family. Finally, enough was enough. Andrej absconded with six of his Fleet-provided security slaves and sent them into the no-man’s land of Gonebeyond Space—beyond the reach of the Jurisdiction’s tyrannical Bench.

Now The Angel of Destruction, a savage terrorist organization from Andrej’s system of origin, means to make Gonebeyond its own. But its ancestral enemy – the secret service of the Dolgorukij church, the Malcontent – has planted a double agent on the inside of the Angel of Destruction. Finally this interstellar menace might be destroyed forever.

But there is trouble. Andrej Koscuisko wasn’t expected to escape from protective custody at Safehaven Medical Center and come looking for his freed bond involuntaries, and now the Malcontent faces Andrej’s unplanned intervention at the worst possible time. Now the only way to save the mission and bring down an organization that has slain whole systems of men, women, and children is for Andrej to embrace the savagery in his own heart and once again take on the role of Judicial torturer—a role that he had fought long and hard to escape. He must deploy every dirty trick and brutal stratagem he knows against the Malcontent agent whose secret he has unwittingly betrayed.

About Blood Enemies:
"A very satisfying entry in a very scary series!"—Janis Ian

Susan R. Matthews was raised in a military family and spent her younger years living around the globe in a myriad of places including Germany, both coasts of the U.S., and India. Often cut off from television and other media, she read voraciously. Her first encounters with science fiction came via classics such as I, Robot and Stranger in a Strange Land. Matthews' debut novel, An Exchange of Hostages, the first entry in her critically acclaimed Under Jurisdiction series, was nominated for the Philip K. Dick Award. Matthews was also a finalist for the John W. Campbell award for best new writer. There are now seven novels in the Under Jurisdiction series. The first six are collected in two omnibus editions Fleet Inquisitor and Fleet Renegade. The newest entry in the series is Blood Enemies, published by Baen Books. Matthews lives in Seattle with her wife, Maggie, and two delightful dogs. She is a veteran of the U.S. Army, where she served as operations and security officer of a combat support hospital. She is also an avid HAM radio operator.