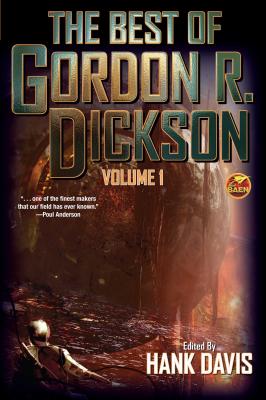 The best of the best from a legendary master of science fiction, the first of two volumes. The Best of Gordon R. Dickson, Volume I, gathers together fourteen stories, predominantly from the first half of legendary science fiction and fantasy writer Gordon R. Dickson's career, ranging from the early 1950s through the 1960s, including tales dragons, dolphins, aliens, werewolves, mutants and humans trying to make sense of an infinitely bewildering universe. A maiden aunt is suddenly given superpowers. An alien who looks like a large, sentient rabbit makes ominous announcement which make no sense from behind an impenetrable force shield. Humans besieged by an alien enemy refuse, against all reason, to give up fighting. And much more, in stories running the gamut from exciting adventure to stark tragedy to hysterical comedy. Plus the never before published "Love Story," written for Harlan Ellison's legendary, but never published anthology, The Last Dangerous Visions. And stay tuned for The Best of Gordon R. Dickson, Volume II, with another generous display of Dickson's virtuosity, covering his brilliant career from 1970s to the century's end. "Dickson is among the best storytellers we have ever had...one of the finest makers that our field has ever known."--Poul Anderson "Dickson is one of SF's standard-bearers."--Publishers Weekly "The grandest saga in the history of science fiction."--Ben Bova on Dickson's Dorsai stories.

Hank Davis is a senior editor at Baen Books. He served in Vietnam in the 101st Airborne Division and has had stories in Analog Science Fiction, If, The Magazine of Fantasy and Science Fiction, and anthologies Orbit, and (theoretically) Harlan Ellison's The Last Dangerous Visions.