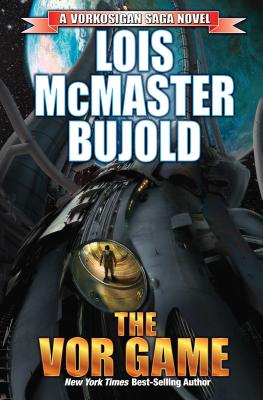 This is book number 6 in the Vorkosigan Saga series.

THE PRINCE AND THE MERCENARY

Miles Vorkosigan has shaken the High Command of his home planet Barrayar to the core and has been sent to the other side of the galaxy as a result. There Miles runs into his old pals, the Dendarii Free Mercenaries. And a good thing, too, because it turns out that Miles's childhood chum—Emperor Gregor to you and me—has been the victim of foul play, and only Miles can save him. In fact, Miles knows he must save Gregor. Because if he doesn't, then the only person who could become emperor is Miles himself, which is, for Miles, a fate worse than death!

About Lois McMaster Bujold’s Vorkosigan Saga:
“The pace is breathless, the characterization thoughtful and emotionally powerful, and the author's narrative technique and command of language compelling. Highly recommended.”—Booklist

“[The Warrior's Apprentice] would work just fine. . . as the introduction to the series as a whole. I suspect that anybody who reads one will be as charmed as I was and want to pick up the rest.”—SF Site

“If you love solid space opera rooted in strong character, you can't go wrong. . . . The Warrior's Apprentice already displays the craft and the heart which would soon make Lois McMaster Bujold one of the most feted talents in SF.”—SF Reviews

About Vorkosigan series entry Diplomatic Immunity:
“Bujold is adept at world-building and provides a witty, character-centered plot, full of exquisite grace notes. . . fans will be thoroughly gripped and likely to finish the book in a single sitting.”—Publishers Weekly