A Single Star and Bloody Knuckles: A History of Politics and Race in Texas (The Texas Bookshelf) (Hardcover) 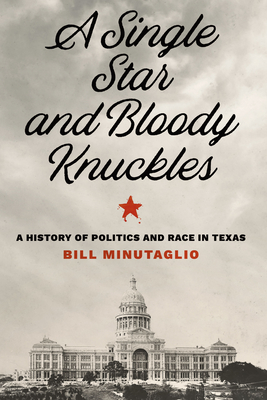 For John Nance “Cactus Jack” Garner, there was one simple rule in politics: “You’ve got to bloody your knuckles.” It’s a maxim that applies in so many ways to the state of Texas, where the struggle for power has often unfolded through underhanded politicking, backroom dealings, and, quite literally, bloodshed. The contentious history of Texas politics has been shaped by dangerous and often violent events, and been formed not just in the halls of power but by marginalized voices omitted from the official narratives.

A Single Star and Bloody Knuckles traces the state’s conflicted and dramatic evolution over the past 150 years through its pivotal political players, including oft-neglected women and people of color. Beginning in 1870 with the birth of Texas’s modern political framework, Bill Minutaglio chronicles Texas political life against the backdrop of industry, the economy, and race relations, recasting the narrative of influential Texans. With journalistic verve and candor, Minutaglio delivers a contemporary history of the determined men and women who fought for their particular visions of Texas and helped define the state as a potent force in national affairs.

Bill Minutaglio is the author of several nonfiction books, including the first biography of George W. Bush, an account of the greatest industrial disaster in US history, and biographies of former attorney general Alberto Gonzales and writer Molly Ivins. He received a PEN Center Award for his coauthored book Dallas 1963, a chronicle of the events preceding the assassination of President John F. Kennedy. His work has also been honored by the National Association of Black Journalists, and he was inducted into the Texas Institute of Letters. Minutaglio is a former clinical professor of journalism at the University of Texas at Austin and reporter, columnist, and editor for the three largest newspapers in Texas. A former columnist for the Texas Observer, his writing has appeared in the New York Times, Esquire, Newsweek, the Washington Post, Texas Monthly, and the Bulletin of the Atomic Scientists, among other publications.

Smoothly tackling this near-herculean research task, [Minutaglio] keeps the sweat stains from showing and writes in prose as cool as a trout stream.
— New York Times

What's striking about [A Single Star and Bloody Knuckles]...is [Minutaglio's] ability to resurrect not only the marquee names we would expect to find in a history of Texas politics (famous and infamous) but also fascinating names that have faded into the fog of history.
— Houston Chronicle

[Minutaglio] delivers a vibrant political history of Texas from the 1870s to the 2020 presidential election...Minutaglio packs his brisk history with entertaining anecdotes...and keeps a close eye on the ways that Black and Latino voters have been marginalized by Texas power brokers. This is a rollicking and richly detailed portrait of the Lone Star state.
— Publishers Weekly

A readable, even rollicking survey of a century and a half of political conflict...A Single Star and Bloody Knuckles does the vital work of presenting to a general audience a powerful argument for the centrality of race in the past, present, and future of Texas politics.
— Texas Monthly

[An] engaging new work... A Single Star and Bloody Knuckles is a noteworthy, timely, and well-written addition to the continuing debates over politics and race in Texas.
— Lone Star Literary Life

Minutaglio is one of the greatest living prose stylists in the land, including lands outside Texas...Starting in 1870 and working up to the present, Minutaglio has produced the best book about the intersection of race and politics throughout Texas history.
— San Antonio Express-News

Even if you don’t live in Texas, this overview of the state’s history from the 1870s to the 2020 presidential election will have you thinking about the South in a whole new way.
— Vogue

[A Single Star and Bloody Knuckles] offers a well-rounded look at the complexities of race and politics, as well as the various characters involved. Minutaglio is to be commended for adding to the underrepresented topics of race and politics in post-civil war Texas historiography.
— Southwestern Historical Quarterly

Bill Minutaglio has a written an excellent (and thoroughly readable) analytical synthesis that should inspire anyone interested in American politics to think more carefully about how the racism of our collective pasts continues to shape and plague our world today.
— Western Historical Quarterly

Minutaglio’s work presents a useful introduction to the civil rights history of Texas...Minutaglio tells his stories well...in an easygoing, approachable style...Readers seeking a broad overview of Texas political history that emphasizes the expansion of civil rights will find that here.
— Journal of Southern History