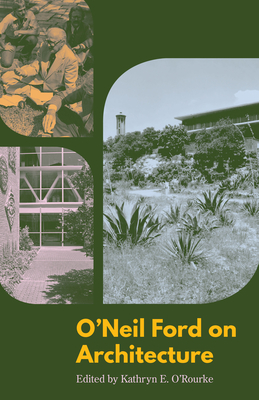 Acclaimed for his designs of the Trinity University campus, the Little Chapel in the Woods, the Texas Instruments Semiconductor Components Division Building, and numerous private houses, O'Neil Ford (1905-1982) was an important twentieth-century architect and a pioneer of modernism in Texas. Collaborating with artists, landscape architects, and engineers, Ford created diverse and enduringly rich works that embodied and informed international developments in modern architecture. His buildings, lectures, and teaching influenced a generation of Texas architects.

O'Neil Ford on Architecture brings together Ford's major professional writings and speeches for the first time. Revealing the intellectual and theoretical underpinnings of his distinctive modernism, they illuminate his fascination with architectural history, his pioneering uses of new technologies and construction systems, his deep concerns for the landscape and environment, and his passionate commitments to education and civil rights. An interlocutor with titans of the twentieth century, including Louis Kahn and J. Robert Oppenheimer, Ford understood architecture as inseparable from the social, political, and scientific developments of his day. An introductory essay by Kathryn E. O'Rourke provides a critical assessment of Ford's essays and lectures and repositions him in the history of US architectural modernism. As some of his most important buildings turn sixty, O'Neil Ford on Architecture demonstrates that this Texas modernist deserves to be ranked among the leading midcentury American architects.