The Mexican American Experience in Texas: Citizenship, Segregation, and the Struggle for Equality (The Texas Bookshelf) (Hardcover) 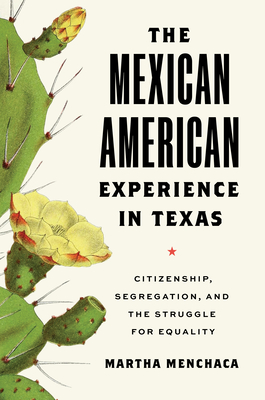 For hundreds of years, Mexican Americans in Texas have fought against political oppression and exclusion—in courtrooms, in schools, at the ballot box, and beyond. Through a detailed exploration of this long battle for equality, this book illuminates critical moments of both struggle and triumph in the Mexican American experience.

Martha Menchaca begins with the Spanish settlement of Texas, exploring how Mexican Americans’ racial heritage limited their incorporation into society after the territory’s annexation. She then illustrates their political struggles in the nineteenth century as they tried to assert their legal rights of citizenship and retain possession of their land, and goes on to explore their fight, in the twentieth century, against educational segregation, jury exclusion, and housing covenants. It was only in 1967, she shows, that the collective pressure placed on the state government by Mexican American and African American activists led to the beginning of desegregation. Menchaca concludes with a look at the crucial roles that Mexican Americans have played in national politics, education, philanthropy, and culture, while acknowledging the important work remaining to be done in the struggle for equality.

Martha Menchaca is a professor of anthropology at the University of Texas at Austin. She is the author of Recovering History, Constructing Race: The Indian, Black, and White Roots of Mexican Americans and Naturalizing Mexican Immigrants: A Texas History.

[The Mexican American Experience in Texas] serves as a thorough retelling of critical events that have shaped the cultural identity [of Mexican Americans]  in Texas all the way back to the state’s earliest days.
— Observer