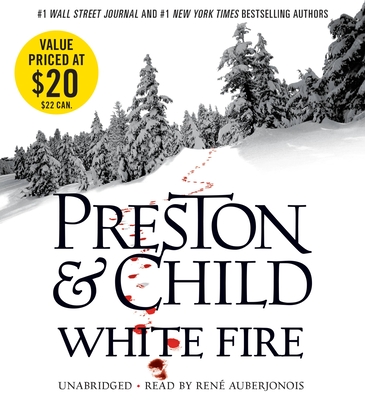 By Douglas Preston, Lincoln Child, Rene Auberjonois (Read by)
Email or call for price.
Out of Print

This is book number 13 in the Agent Pendergast Series series.

Past and present collide as Special Agent Pendergast uncovers mysterious connections between a string of 19th century bear attacks in a Colorado mining town, a fabled, long-lost Sherlock Holmes story, and a deadly present-day arsonist.

In 1876, in a mining camp called Roaring Fork in the Colorado Rockies, eleven miners were killed by a rogue grizzly bear. Corrie Swanson has arranged to examine the miners' remains. When she makes a shocking discovery, town leaders try to stop her from exposing their community's dark and bloody past.

Just as Special Agent Pendergast of the FBI arrives to rescue his protege, the town comes under siege by a murderous arsonist who-with brutal precision-begins burning down multimillion-dollar mansions with the families locked inside. Drawn deeper into the investigation, Pendergast discovers a long-lost Sherlock Holmes story that may be the key to solving both the mystery of the long-dead miners and the modern-day killings as well.

Now, with the ski resort snowed in and under savage attack-and Corrie's life suddenly in grave danger-Pendergast must solve the enigma of the past before the town of the present goes up in flames.

The thrillers of Douglas Preston and Lincoln Child "stand head and shoulders above their rivals" (Publishers Weekly). Preston and Child's Relic and The Cabinet of Curiosities were chosen by readers in a National Public Radio poll as being among the one hundred greatest thrillers ever written, and Relic was made into a number-one box office hit movie. They are coauthors of the famed Pendergast series and their recent novels include Fever Dream, Cold Vengeance, Two Graves, and Gideon's Corpse. In addition to his novels, Preston writes about archaeology for the New Yorker and Smithsonian magazines. Lincoln Child is a former book editor who has published five novels of his own, including the huge bestseller Deep Storm. Readers can sign up for The Pendergast File, a monthly "strangely entertaining note" from the authors, at their website, www.PrestonChild.com. The authors welcome visitors to their alarmingly active Facebook page, where they post regularly.