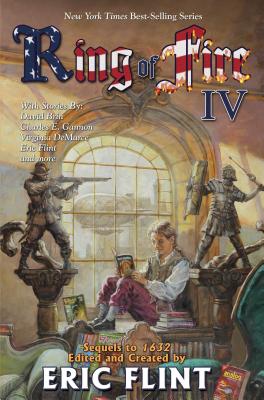 This is book number 25 in the The Ring of Fire series.

NEW YORK TIMES BEST-SELLING SERIES WITH A STORY BY DAVID BRIN AND AN ALL-NEW STORY BY ERIC FLINT. Collection #4 of rollicking and idea-packed alternate history tales written by today’s hottest science fiction writers and edited by New York Times best-seller Eric Flint. After a cosmic accident sets the modern-day West Virginia town of Grantville down in war-torn seventeenth century Europe, these everyday resourceful Americans must adapt – or be trod into the dust of the past.

Let’s do the “Time Warp” again!  Another anthology of rollicking, thought-provoking collection of tales by a star-studded array of top writers such as David Brin and Eric Flint himself – all set in Eric Flint’s phenomenal Ring of Fire series.

A cosmic accident sets the modern West Virginia town of Grantville down in war-torn seventeenth century Europe.  It will take all the gumption of the resourceful, freedom-loving up-timers to find a way to flourish in a mad and bloody time.  Are they up for it?  You bet they are.  The fourth rollicking and idea-packed collection of Grantville tales edited and introduced by Eric Flint, and inspired by his now-legendary 1632.  Plus: contains an all-new story by Eric Flint.

“[Eric Flint] can entertain and edify in equal, and major, measure.” –Publishers Weekly