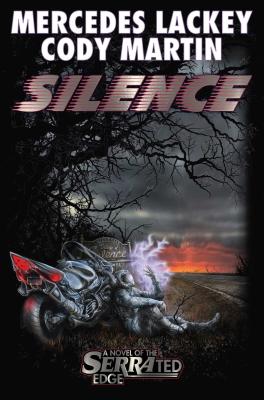 This is book number 9 in the Serrated Edge series.

Teenager Staci's father has just remarried, and now she finds herself being shunted aside by her new stepmother.  Shunted all the way to the run-down and dying Maine town of Silence, in fact, and the custody of her alcoholic mother.

Silence seems to be stuck in the proverbial stone age. There's no cell phone service except at the very top of a bluff outside of town, no internet except dialup, and not one familiar franchise or business. Staci's mom seems to have gotten even worse since the last time Staci lived with her. The only bright spots in the whole place are a friendly waitress at the diner, and a bookstore where she meets a gaggle of geeks and gamers.

But all is not as it seems in Silence. There are strange things moving beneath the shabby surface, terrible plots in play, and deadly players in the game, and Staci is about to find herself caught up in the middle of it all.

Cody Martin is a coauthor with Mercedes Lackey of three other books in the metahero saga, The Secret World Chronicle including entries Invasion, World Divided, Revolution, and Collision. He is an avid gamer, but spends his extra time chained to a computer, writing. Originally from Scottsdale, Arizona, he currently resides in Florida.