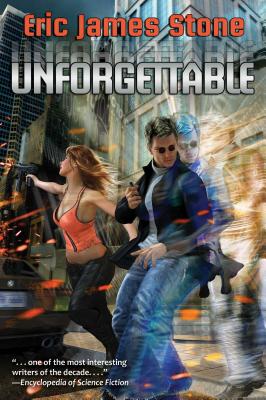 Out of sight, out of mind.

In the near future, a fluke of quantum mechanics renders Nat Morgan utterly forgettable. No one can remember he exists for more than a minute after he's gone. It's a useful ability for his career as a CIA agent, even if he has to keep reminding his boss that he exists.

Nat's attempt to steal a quantum chip prototype is thwarted when a former FSB agent, Yelena Semyonova, attempts to steal the same technology for the Russion mob.

Along with a brilliant Iranian physicist who wants to defect, Nat and Yelena must work together to stop a ruthless billionaire from finishing a quantum supercomputer that will literally control the fate of the world.


About Unforgettable:
"[A]n ingenious and sympathetic hero who earns readers’ goodwill and expectations for a strong ongoing series."—Publishers Weekly

"The strongest section of the novel follows Morgan’s childhood and the difficulties of navigating a world in which he effectively doesn’t exist."—Booklist

"In addition to telling a great adventure tale, Stone explores what it means to belong to a community, the nature of free will and the importance of autonomy."—The Dailey News of Galveston County

About the work of Eric James Stone:
“[O]ne of the most interesting writers of the decade. . . .”—Encyclopedia of Science Fiction

“The author creates a clever plot and characters worth rooting for, all leading to an exciting climax.”—Tangent Online

A Nebula Award winner and Hugo Award nominee, Eric James Stone has had over fifty stories published in venues such as Year's Best SF 15, Analog, Nature, and Orson Scott Card's Intergalactic Medicine Show. He lives in Utah with his wife Darci, a high school physics teacher.