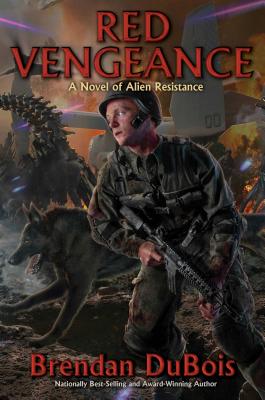 By Brendan DuBois
Email or call for price.
Special Order

From two-time Shamus Award winner Brendan DuBois comes the sequel to Dark Victory. A terrifying and original tale of teens who are fighting to save their lives . . . and the future of planet Earth. U.S Army Sergeant Randy Knox is sixteen, and already a seasoned veteran. He is an alien killing prodigy who has eradicated more of the invading Creepers than anyone can keep track of. But Randy is also a high school student struggling with geometry. And he is a young man whose heart is being pulled in two directions by two very different girls. One, Abby Monroe, a straightforward warrior. The other, Serena Coulson, dangerous and mysterious. Randy, with the help of Serena's strange brother, alien interpreter Buddy Coulson, has convinced a Creeper base to surrender. After a decade of conflict, misery, and the death of millions of humans, it finally seems that the war may come to an end. But then the surrender effort turns into a bloody ambush. More disturbing, Buddy and Serena Coulson arrive, having escaped torture and interrogation at the hands of a C.I.A. operative. It begins to dawn on Randy that, as much as he doesn't want to believe it, the powers-that-be may not want the war to be over. Now, as Randy's hodge-podge military unit makes a desperate stand at a remote outpost, young Sergeant Randy Knox learns just how far he will go to protect those he loves--and what it takes to save humanity from total alien domination. About Red Vengeance
"Forced into a two-front war fighting both the attacking creepers and saboteurs within his own ranks, Randy learns how far he will go to protect those he loves and defeat the Creeper menace. Red Vengeance is a worthy follow-up to "Dark Victory" and excellent and entertaining stand-alone. If you like action science fiction you will enjoy Brendan DuBois' latest."--Daily News of Galveston County About prequel, Dark Victory
"DuBois (Resurrection Day) has written a great series opener for a range of readers. The adolescent characters make this an especially solid choice for teens with an interest in apocalyptic and disaster fiction."--Library Journal "Ambitious . . . nail-biting suspense and satisfyingly complex characterization . . . the contrast between DuBois's world and our own is stark and well drawn."--Publishers Weekly "A page-turner of an alien invasion novel with fine world-building and characterization. DuBois writes with a strong hand, keeping the fighting and military side of things gritty. From the weapons to the people, Dubois gets it right."--Steve Miller, cocreator of the best-selling Liaden Universe(R) series About Brendan Dubois:
"Dubois gives the reader both exquisite suspense and deeply realized characters."--Booklist "Brendan DuBois is a fine novelist and easily the best short-story writer of his generation." --- Lee Child, New York Times best-selling author.

Brendan DuBois is the award-winning author of sixteen novels and more than 120 short stories. His short stories have twice won him the Shamus Award from the Private Eye Writers of America, and have also earned him three Edgar Award nominations. He has recently collaborated with New York Times best-selling author James Patterson on several novellas for Patterson's Bookshots. Brendan lives in New Hampshire. A former Jeopardy! champion, he also appeared on--and won--the game show The Chase.