The Day After Gettysburg, 1 (Hardcover) 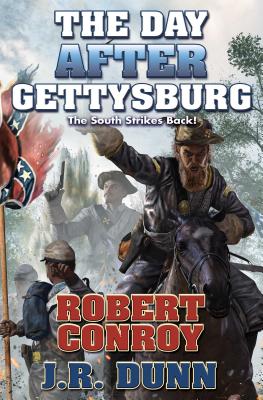 New Alternate History from a Master of the Form: Robert Conroy was an unalloyed master of alternate history. Now, J.R. Dunn completes one of his final novels. LEE STRIKES BACK After a terrible setback at Gettysburg, General Robert E. Lee does not retreat across the Potomac and his ultimate surrender at Appomattox. Instead, he turns the tables on Union General George Meade with a vicious counterattack that sets the Union Army on its heels. While Lee sets across Pennsylvania in a dazzling war of maneuver, a crazed actor closes in on President Abraham Lincoln. Standing in his way is Major Steve Thorne, a thoughtful lawyer-turned-soldier fighting for the Union and his own self-respect, and Cassandra Baird, a young woman whose courage is only surpassed by her determination to teach emancipated slaves to read and write, and so ensure their freedom. Opposing them is Colonel Corey Wade, a brave Confederate officer who is just as determined to fight to the death for his honor and that of his state. And, in the end, the fate of a nation may come down to a freed slave named Hadrian, a man with an iron resolve never to return to bondage. The time has come to strike a blow for liberty--or go down swinging
About The Day After Gettysburg: "...expertly completed...Dunn's work matches Conroy's high standards for writing style, solid plotting and frenetic battle scenes."--Publishers Weekly About Germanica:
"Conroy captures the intricacies of WWII with an eye for historical nuance, and he crafts a believable alternate ending to the war. . . . T]he story is buoyed by Conroy's effective snapshot of the era."--Publishers Weekly " A] gripping alternate World War II saga . . ."--Library Journal About Rising Sun:
"Conroy extrapolates a new and militarily plausible direction for WWII . . . A thrilling adventure."--Booklist About Himmler's War:
" Conroy] adds a personal touch to alternate history by describing events through the eyes of fictional characters serving on the front lines. VERDICT: Historical accuracy in the midst of creative speculation makes this piece of alternate history believable."--Library Journal

Robert Conroy was the author of a run of hugely popular alternate history novels, including Himmler's War, Rising Sun, 1920: America's Great War, Liberty: 1784, 1864: Custer in Chains, and Germanica for Baen Books. His 1942, which is set within a Japanese conquest of Hawaii, won the prestigious Sidewise Award for alternate histories. Conroy lived for many years in southeastern Michigan. J.R. Dunn is the author of time travel novels This Side of Judgment, Days of Cain--widely hailed as one of the most powerful time travel novels to deal with the Holocaust--and Full Tide of Night. He was the long-time associate editor ofThe International Military Encyclopedia and is now an editor at The American Thinker. His nonfiction appears regularly on Baen.com