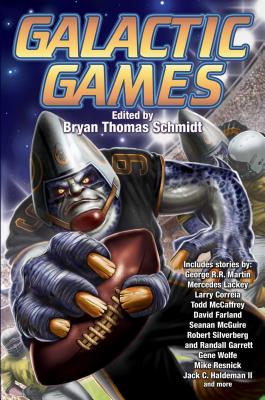 The Olympic Games—pushing skills, minds, brains and bodies to their limits in the ultimate competition on Earth. But once mankind has reached the stars, playing sports will travel with us. Yet galactic sports come with new challenges and possibilities. And new dangers.

“This themed anthology . . . will appeal to a wide range of readers, who will appreciate the diversity of stories . . . a solid introduction to a classic genre.”—Kirkus

“Editor Schmidt adds grandmasters to a mix of newer established names and balances the tragic with the humorous.”—Publishers Weekly

About Shattered Shields, edited by Jennifer Brozek and Bryan Thomas Schmidt:
“In this well-built anthology, seventeen original stories cut to the heart of military fantasy, diving directly into the most exciting moments of dramatic bravery, grand battles, and life-changing heroism. . . . Readers who prefer to cut straight to the action, but want more depth than pure hack-and-slash, will find these offerings appealing.”—Publishers Weekly

“An inventive and thought-provoking set of tales that capture the bravery and terrors of battle. Carries the banner of military fantasy proudly.”—John Marco, author of The Bronze Knight Series

About The Raygun Chronicles, edited by Bryan Thomas Schmidt:
“Fans of sf should enjoy this stylistically varied homage to a genre as old as the fiction . . . ”—Library Journal

About Beyond the Sun, edited by Bryan Thomas Schmidt:
“Beyond the Sun mixes courage, redemption, and stark terror in tales of distant worlds. Buckle in.”—Jack McDevitt, author of Firebird