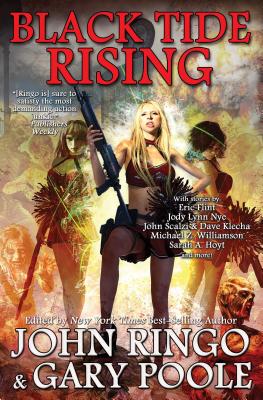 This is book number 5 in the Black Tide Rising series.

RESIST THE ZOMBIE PLAGUE! Top authors bring new perspectives to John Ringo's Black Tide Rising universe, in which humanity fights back against the hordes of infected.

The news that humanity had been dreading for ages had come true. Zombies are real. Worst of all, we created them. The apocalypse was upon us, and every man, woman and child had to answer a simple question of themselves: “What do we do now?” For a group of neighbors in the Chicago suburbs of Northern Indiana, it was “work together or die”...and figure out how to live on top of oil storage tanks to keep the zombies at bay. For the Biological Emergency Response Teams in New York City, it was “how long can we fight off the infected before it's too late” . . .as well as having to fight other groups all out to claim a dwindling stock of supplies and safety. And for a group of cheerleaders, it was about the end of their world. And about what happens when you get a group of physically fit young women with guns really, really angry.