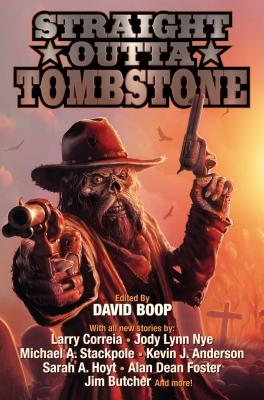 Tales of the Weird Wild West. Top authors take on the classic western, with a weird twist. Includes new stories by Larry Correia and Jim Butcher!

Come visit the Old West, the land where gang initiations, ride-by shootings and territory disputes got their start. But these tales aren’t the ones your grandpappy spun around a campfire, unless he spoke of soul-sucking ghosts, steam-powered demons and wayward aliens.

Here then are seventeen stories that breathe new life in the Old West. Among them: Larry Correia explores the roots of his best-selling Monster Hunter International series in "Bubba Shackleford’s Professional Monster Killers." Jim Butcher reveals the origin of one of the Dresden Files' most popular characters in "Fistful of Warlock." And Kevin J. Anderson's Dan Shamble, Zombie P.I., finds himself in a showdown in "High Midnight." Plus stories from Alan Dean Foster, Sarah A. Hoyt, Jody Lynn Nye, Michael A. Stackpole, and many more.

This is a new Old West and you’ll be lucky to get outta town alive!

About Straight Outa Tombstone:
“The authors were having fun. Even when they are not playing the stories for laughs, they are taking an opportunity to enjoy an opportunity to tell a story with a fresh twist, and expand out of their expected boundaries.
Straight Outta Tombstone is a change-up pitch, which will leave readers laughing on occasion, spooked at times, and entertained throughout.”—The Galveston County Daily News

David Boop is an award-winning essayist, recent Summa Cum Laude in creative writing (earned for a weird western piece) and former acquisition editor for both Flying Pen Press and Lifevest Publishing. David has been a journalist, actor, disc jockey and stand-up comedian. He’s published across several genres, but specializes in weird westerns. Additionally, David has done media tie-in work for the Green Hornet, Veronica Mars and the pulp hero the Black Bat (heavily disputed inspiration for Batman). He’s collaborated with Kevin J. Anderson, the late C.J. Henderson, Peter J. Wacks and Josh Vogt. He is a member of the Western Writers of America, the International Association of Media Tie-in Writers, the Horror Writers Association and the Society of Children’s Book Writers and Illustrators.