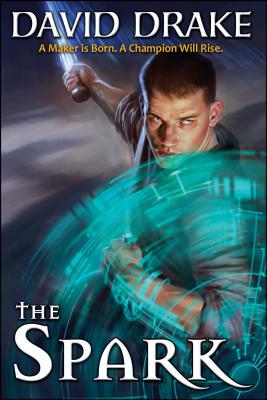 NEW STANDALONE NOVEL BY SF MASTER DAVID DRAKE. In a violent world in which civilization has fallen and monsters roam, a young hero will rise.

In the time of the Ancients the universe was united—but that was so far in the past that not even memory remains, only the broken artifacts that a few Makers can reshape into their original uses. What survives is shattered into enclaves—some tiny, some ruined, some wild.

Into the gaps between settlements, and onto the Road that connects all human reality and the reality that is not human and may never have been human, have crept monsters. Some creatures are men, twisted into inhuman evil; some of them are alien to Mankind—

A Leader has arisen, welding the scattered human settlements together in peace and safety and smashing the enemies of order with an iron fist. In his capital, Dun Add, the Leader provides law and justice. In the universe beyond, his Champions advance—and enforce—the return of civilization.

Pal, a youth from the sticks, has come to Dun Add to become a Champion. Pal is a bit of a Maker, and in his rural home he's been able to think of himself as a warrior because he can wield the weapons of the Ancient civilization.

Pal has no idea of what he's really getting into in Dun Add. On the other hand, the Leader and Dun Add have no real idea of what might be inside this hayseed with high hopes.

THE SPARK: A story of hope and violence and courage. And especially, a story of determination.