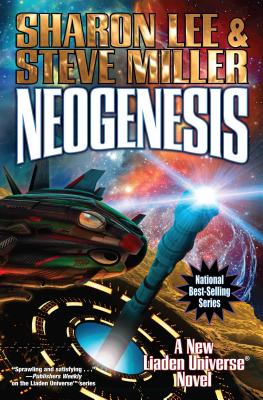 This is book number 21 in the Liaden Universe® series.

Menace from Back Space Looming out of the Dust of Time

The Complex Logic Laws were the result of a war waged hundreds of years in the past, when two human powers threw massive AI navies at each other and nearly annihilated themselves.  Being human, they blamed their tools for this near miss; they destroyed what was left of the sentient ships, and made it illegal to be, manufacture, or shelter an independent logic.

Strangely, however, the Free Ships and other AIs did not turn themselves in or suicide, they merely became wary of humans, and stayed under their scans.  A clandestine support network grew up, including hidden yards where smart ships were manufactured, and mentors--humans specially trained to ease a new intelligence into the universe--socialized them, and taught them what they needed to know to survive.

Among those with a stake in the freedom of Independent Logics is Theo Waitley, who is somewhat too famously the captain of intelligent ship Bechimo. Theo's brother, Val Con yos'Phelium, presides over a household that has for a generation employed an AI butler.  Recently, he approved the "birth" of the butler's child, who was sent, with human mentor Tolly Jones, to rescue or destroy an orphaned AI abandoned at a remote space station.

Then there's Uncle, the shadowy mastermind from the Old Universe, whose many projects often skirt the boundaries of law, both natural and man-made – and the puppet-masters at the Lyre Institute, whose history is just as murky – and a good deal less honorable.

All have an interest in the newly-awakening Self-Aware Logic that is rumored to have the power to destroy universes.

The question is:  Who will get to it first?

About Neogenesis:
"As always, this intelligent space opera focuses on matters of manners, honor, duty, and clever repartee; violence is rarely the solution, and subtlety wins out over overt force. . . . [Neogenesis] provides thoroughly satisfying progression or resolution for multiple threads and will feel comfortably familiar for fans of Korval’s escapades."—Publishers Weekly