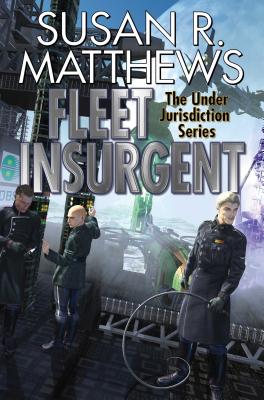 This is book number 8 in the Under Jurisdiction series.

NOVELLAS, SHORT STORIES, AND MORE IN THE CRITICALLY ACCLAIMED UNDER JURISTICTION SERIES from John W. Campbell Award finalist Susan R. Matthews. Together for the first time, here are the novellas, novelettes, and short stories that complete Matthews' epic science fiction series. Plus, supplemental materials that flesh out Matthews' characters and detailed worldbuilding.

THE JURISDICTION CAN’T HANDLE THE TRUTH!

These are the stories of Andrej Koscuisko’s “few good men” who will one day bring down the totalitarian star empire, the Jurisdiction—if only they can escape being ground down under the very oppression they fight.

Here are personal histories of favorite characters from the series, including Joslire Curran and Security Chief Stildyne. There are three novellas—two for the first time in print—telling the stories behind critical events in the series, such as the infamous devil’s bargain between Andrej Koscuisko and Captain Lowden on the Ragnarok that nearly led to Andrej’s mental destruction. It’s a dark cornucopia of novelettes, stories, and vignettes from The Life and Hard Times of Fleet Inquisitor, renegade, and savior, Andrej Koscuisko—who is Not a Nice Man—but who may be the only man who stands a chance of returning human kindness and mercy to the stars!

"A very satisfying entry in a very scary series!"—Janis Ian on Blood Enemies

“[Matthews] brilliantly uses science fiction’s freedom of creation to make a world in which she can explore deep moral conflicts.”—Denver Post

Susan R. Matthews was raised in a military family and spent her younger years living around the globe in a myriad of places including Germany, both coasts of the U.S., and India. Often cut off from television and other media, she read voraciously. Her first encounters with science fiction came via classics such as I, Robot and Stranger in a Strange Land. Matthews' debut novel, An Exchange of Hostages, the first entry in her critically acclaimed Under Jurisdiction series, was nominated for the Philip K. Dick Award. Matthews was also a finalist for the John W. Campbell award for best new writer. There are now seven novels in the Under Jurisdiction series. The first six are collected in two omnibus editions Fleet Inquisitor and Fleet Renegade. The newest entry in the series is Blood Enemies, published by Baen Books. Matthews lives in Seattle with her wife, Maggie, and two delightful dogs. She is a veteran of the U.S. Army, where she served as operations and security officer of a combat support hospital. She is also an avid HAM radio operator.