A Fistful of Elven Gold (Paperback) 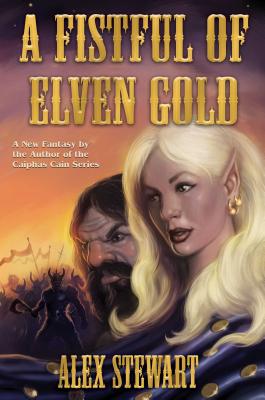 When someone starts killing his fellow bounty hunters in the port of Fairhaven, Drago Appleroot is happy to help his contacts in the City Watch with their investigation—for a reasonable fee, of course. But posing as an assassin-for-hire to draw out the killer attracts the attention of two separate groups from a far-off Elven kingdom whose private war is being fought on the streets of his home town.

Pitched into a maelstrom of treachery and lethal politics, Drago is forced into a long and dangerous journey to the heart of the Sylvan Marches, where one determined gnome might just decide the destiny of a kingdom. If he can survive long enough to decide which side he ought to be on.

About A Fistful of Elven Gold:

About Alex Stewart's Shooting the Rift:

“Stewart makes his [faster than light travel] technology as accessible and relevant as the neuroware, genetic engineering, anti-gravity, and other assorted techno-furniture of the milieu. His various venues . . . are limned with vigor, vividness and vivacity. The personages are all true-to-life, delivering fine banter and plot-propelling dialogue, arising out of fully believable motivations and drives and desires. . . . the best of what ambitious adventure SF has always done and can plainly continue to do.”—Locus

Born in Southend-on-Sea, a fading costal resort at the mouth of the Thames Estuary, Alex Stewart has been writing stories since he could first hold a pen. Introduced to science fiction at an early age by his grandmother’s enthusiasm for Thunderbirds, Godzilla movies, and weekly gift of comic books, he rapidly exhausted the local library’s stock of juvenile SF, and resorted to raiding the adult shelves with his mother’s ticket.

Since his debut in British SF magazine Interzone, Stewart has has written short stories, novels, screenplays, comic scripts, reviews, criticism and RPG scenarios, both under his own name and the pseudonym Sandy Mitchell. As Sandy Mitchell, he’s best known for the popular Commissar Cain series of Warhammer 40,000 tie-ins, described by David Drake as “First rate military SF.” In the late Nineties, he was also a staff writer on the BBC prime-time technothriller series Bugs.