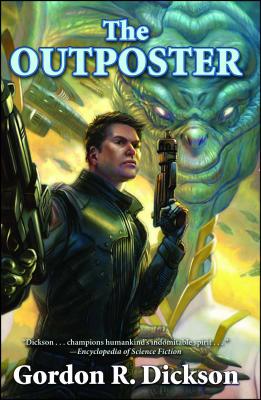 A classic of science fiction from SF legend Gordon R. Dickson, winner of three Hugo awards, a Nebula award, and an inductee into the Science Fiction Hall of Fame.

The Earth is overcrowded. Chosen by lottery, people are shunted off to the far-flung planetary colonies. But winning this lottery is no prize, for the colonist are largely ignored by the people of Earth, considered disposable. Left to defend for themselves, the colonists are plagued by low supplies and are forced to eke out a hardscrabble existence. Worse, they face an ever-looming threat from without: the alien Meda V'Dans, who routinely attack without provocation.

Fortunately, the colonists have the Outposters to protect them. One such Outposter is Mark Ten Roos, a young man with a score to settle against the Meda V'Dans . . . and the will to bring a corrupt system to its knees.

Gordon R. Dickson (1923-2001) was one of the most prolific and popular science fiction writers of the 20th Century, frequently nominated for the Hugo and Nebula Awards and winning three Hugos and one Nebula. He also received the Jupiter, August Derleth, and Skylark Awards, and was inducted into the Science Fiction Hall of Fame. He published nearly fifty solo novels, as well as several collaborations with such SF masters as Poul Anderson, Ben Bova, Keith Laumer, and Harry Harrison, and over one hundred and fifty short stories, novelettes, and novellas. His most popular works were the novels and shorter pieces in the Childe cycle (which included the Dorsai stories). Also very popular was his Dragon series of fantasy novels, which began with the award-winning The Dragon and the George, and continued for a total of nine novels, and the humorous Hoka stories, co-authored with Poul Anderson, soon to be available again from Baen Books.