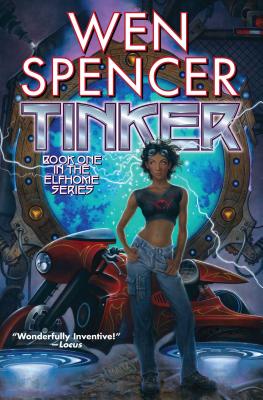 This is book number 1 in the Elfhome series.

Inventor, girl genius Tinker lives in a near-future Pittsburgh which now exists mostly in the land of the elves. She runs her salvage business, pays her taxes, and tries to keep the local ambient level of magic down with gadgets of her own design. When a pack of wargs chase an Elven noble into her scrap yard, life as she knows it takes a serious detour. Tinker finds herself taking on the Elven court, the NSA, the Elven Interdimensional Agency, technology smugglers and a college-minded xenobiologist as she tries to stay focused on what's really important – her first date. Armed with an intelligence the size of a planet, steel-toed boots, and a junkyard dog attitude, Tinker is ready to kick butt to get her first kiss.

"Each and every character is fascinating, extraordinarily well-developed, and gets right under your skin. . . . A terrific, memorable story." —Julie E. Czerneda, author of In the Company of Others

"Spencer takes her readers on a fast-paced journey into disbelief. [Her] timing is impeccable and the denouement stunning." —Romantic Times (four-star review)