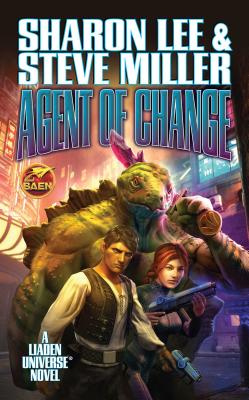 This is book number 1 in the Liaden Universe® series.

IT STARTS WITH A MAN WHO WAS NOT WHAT HE SEEMED

“The man who was not Terrence O’Grady had come quietly.”

Introducing Val Con yos’Phelium – interstellar spy, starship pilot, musician, and incidentally, a brother to Clutch Turtles.  Running from an assassination he comes upon Miri Robertson, a not-so-retired mercenary soldier born to trouble on a back world and facing disastrously uneven odds in a firefight with her former employer’s enemies. Forced to intervene, Val Con becomes a target himself, and the pair are hunted, hounded across space, becoming unwilling partners of necessity. Facing terrible danger from within and without, their own skills and training argue that one of them must die if either is to survive. But Val Con has faced tricky situations before, and he's not about to let something like impossible odds get him down.