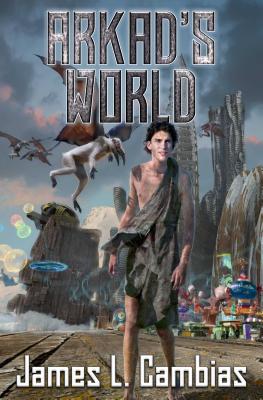 Adventure and Excitement on an Alien World. Packed with exotic world-building and amazing characters, Arkad's World is a rollicking adventure story about growing up and the things we share that make us human, from celebrated author James L. Cambias.

CROSS A MAD PLANET FOR TREASURE AND FREEDOM

Young Arkad is the only human on a distant world, on his own among beings from across the Galaxy. His struggle to survive on the lawless streets of an alien city is disrupted by the arrival of three humans: an eccentric historian named Jacob, a superhuman cyborg girl called Baichi, and a mysterious ex-spy known as Ree. They seek a priceless treasure which might free Earth from alien domination. Arkad risks everything to join them on an incredible quest halfway across the planet. With his help they cross the fantastic landscape, battling pirates, mercenaries, bizarre creatures, vicious bandits and the harsh environment. But the deadliest danger comes from treachery and betrayal within the group as dark secrets and hidden loyalties come to light.

Praise for Arkad's World:
“Far-flung adventure . . . Cambias offers up an entertaining coming-of-age novel filled with action and surprises. His aliens are suitably non-human in mannerisms, attitudes, and objectives, and his worldbuilding suggests a vast universe ready for further exploration. Readers . . . will find this hits the spot.”—Publishers Weekly

“. . . a classic quest story, a well-paced series of encounters with different folk along the way, building momentum toward a final confrontation with Arkad's past. . . [with] a delicious twist to the end.”—ALA Booklist

"Cambias has achieved a feat of world-building: an expansive, believable setting with fascinating aliens, compelling mysteries, and a rich sense of history."—Bookpage

"Drop a teenage boy into a distant planet chock full of colorful aliens--with troubles all their own. Stir, flavor, apply heat. A tour de force in the field, and great, quick fun."—Gregory Benford

Praise for the work of James L. Cambias:

"Beautifully written, with a story that captures the imagination the way SF should."—Booklist, Starred Review

“An engaging nail-biter that is exciting, fun and a satisfying read.” —The Qwillery

''An impressive debut by a gifted writer.''—Publishers Weekly, Starred Review

"James Cambias will be one of the century's major names in hard science fiction.''—Robert J. Sawyer, Hugo Award-winning author of Red Planet Blues

James L. Cambias is a writer, a game designer, and the cofounder of Zygote Games. He has been nominated for the James Tiptree Jr. Award and the 2001 John W. Campbell Award for Best New Writer. He lives in western Massachusetts.