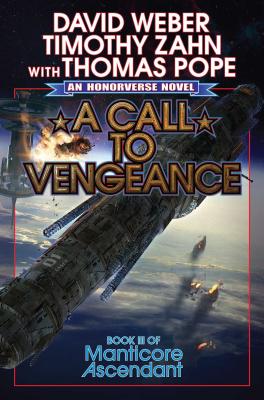 This is book number 3 in the Manticore Ascendant series.

THE STAGE IS SET FOR CONFLICT

Travis Long and Lisa Donnelly of the Royal Manticoran Navy have been stalwart defenders of the Star Kingdom through thick and thin. Now the challenges are greater than ever. After the disastrous attack on the Manticoran home system by forces unknown, the Royal Manticoran Navy stands on the brink of collapse. A shadowy enemy with the resources to hurl warships across hundreds of light-years seeks to conquer Manticore, while danger lurks within the Kingdom’s own government, where politicians are out to weaken the Navy for political gain.

DESTINY AWAITS AMONG THE STARS

Now a fresh tragedy strikes the Star Kingdom, and while the reigning House of Winton faces enemies at home, Travis, Lisa, and the other officers of the Royal Manticoran Navy must reunite with old friends and join new allies to hunt down and eliminate the forces arrayed against them in a galaxy-spanning conspiracy. The prize: a stake in the vast expansion of trade that could pull Manticore out of the backwaters of the galaxy and place the Star Kingdom on the center stage of history.