House of Assassins (Saga of the Forgotten Warrior #2) (Hardcover) 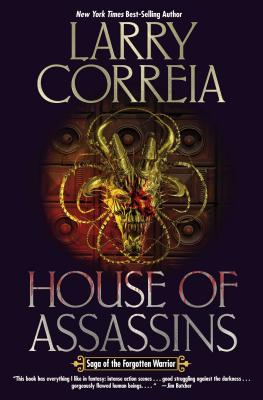 Ashok Vadal was once a member of the highest caste in all of Lok. As a Protector, he devoted his life to upholding the Law, delivering swift justice with his ancestor blade Angruvadal. None was more merciless than he in stamping out the lingering belief in gods and demons among the casteless.

But then Ashok learned that his life to that point had been a lie. He had been nothing more than an unwitting pawn in a political game. His world turned upside down, he began a campaign of rebellion, war, and destruction unlike any the continent of Lok had ever seen.

A PROPHETESS IS KIDNAPPED

As first daughter of Vane, Thera had trained for combat. But then Thera was struck by lightning, and she began to hear—the Voice. Now a reluctant prophet with the power to see into the future, she fought alongside Ashok Vadal and his Sons of the Black Sword until a shapeshifting wizard with designs on her powers spirited her away. He holds her prisoner in the House of Assassins.

THE FATE OF THE WORLD LIES IN THE BALANCE

Ashok Vadal marches to rescue Thera. But it seems Ashok may be caught in a game played by gods for the fate of the world itself. If the gods do exist, Ashok has warned them: stay out of the way.

The gods would do well to listen.