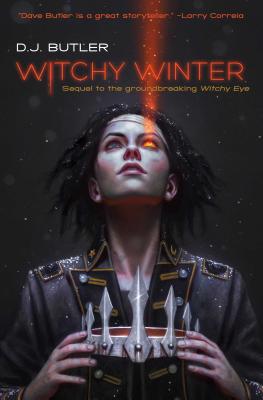 This is book number 2 in the Witchy War series.

SEQUEL TO WITCHY EYE. Next in series, which debuted with the stunningly reviewed Witchy Eye. Butler delivers another brilliant Americana flintlock fantasy novel.

Sarah Calhoun paid a hard price for her entry onto the stage of the Empire of the New World’s politics, but she has survived. Now Sarah rides north into the Ohio and her father’s kingdom, Cahokia. On the way, Sarah must master her own people’s inscrutable folkways if she has any hope of capturing the Serpent Throne. To do so she’ll have to defeat seven potent candidates, each drawn to the chance to acquire supreme power over the land itself. Finally, Sarah must learn the will of a hidden goddess if she hopes to avoid destroying her own soul in the attempt to claim her birthright.

The continent has become the domain of ancient folkways, shamanic kings, renegade generals, and magic-wielding priests. All are part of a witch’s brew of shifting alliances seasoned with backwoods battles, barter with life and death in the balance, and deep magic drawn from the depths of the land itself.

"Witchy Eye is  a brilliant blend of historical acumen and imagination, a tour-de-force that is at once full of surprises and ultimately heart-warming. This is your chance to discover one of the finest new stars writing today!"–David Farland, New York Times bestselling author