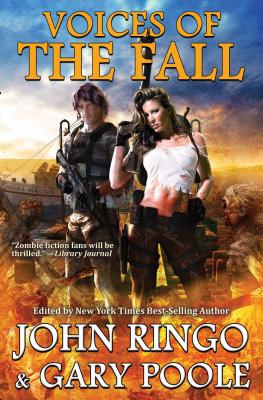 STAND AGAINST THE BLACK TIDE RISING

Civilization may have crumbled to horror and rabid zombie infection, but the humans who remain will do everything they can to survive—and fight for the chance to raise a new world from the ashes. Everyone who survived the plague lived through the Fall, that terrible autumn when life as they had known it ended in blood and chaos.

THESE ARE THE VOICES OF THE FALL.

Nuclear attack submariners facing sudden and unimaginable crises. Paid hunters on a remote island suddenly cut off from any hope of support. Elite assassins. Never-made-it retirees. Bong-toting former soldiers. There were seven and a half billion stories of pain and suffering, courage, hope, and struggle crying out from history.

BLACK TIDE RISING SERIES:
Under a Graveyard Sky
To Sail a Darkling Sea
Islands of Rage and Hope
Strands of Sorrow
Black Tide Rising
Voices of the Fall

Gary Poole has worked in the entertainment and publishing industry for his entire adult life. He's worked directly with John Ringo on over a dozen novels, and has adapted several of them into screenplays (all of which remain in development). When not working with Ringo, he is the managing editor of a successful alternative newsweekly in Tennessee and spent years on the radio as a talk show host and award-winning broadcast journalist.