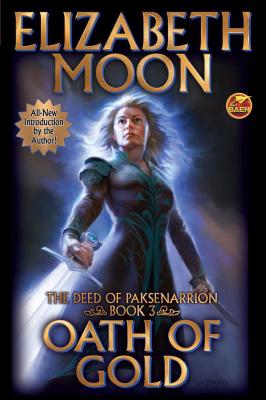 This is book number 3 in the Paksenarrion series.

THE EPIC CONCLUSION TO THE DEED OF PAKSENARRION SERIES

Paksenarrion—Paks for short—was somebody special. Never could she have followed her father’s orders and married the pig farmer down the road. Better a soldier’s life than a pig farmer’s wife, and so, though she knew that she could never go home again, Paks ran away to be a soldier. And so began an adventure destined to transform a simple sheepfarmer’s daughter into a hero fit to be chosen by the gods.

Now an accomplished warrior in her own right, Paks takes on a holy quest that will test her limits. For the gods are no longer pleased with Paksenarrion, and their wrath may well spell her destruction.

Features an all-new introduction by the author!

"[T]he first work of high heroic fantasy I've seen that has taken the work of Tolkien, assimilated it totally and deeply and absolutely, and produced something altogether new and yet incontestably based on the master... [Moon's] military knowledge is impressive, her picture of life in a mercenary company most convincing. I'm deeply impressed."—Judith Tarr

New York Times best-selling author and former Marine Elizabeth Moon has written many novels, including the Paksenarrion fantasy trilogy (available from Baen as The Deed of Paksenarrion and also as separate books), the Heris Serrano space adventure series (the first three novels of which have been combined as Heris Serrano), and Remnant Population, which was a Hugo Award finalist. For Del Rey, she has written Command Decision, Engaging the Enemy, Marque and Reprisal, Trading in Danger, and the Nebula Award winner The Speed of Dark. After earning a degree in history from Rice University, Moon went on to obtain a degree in biology from the University of Texas, Austin.

When not writing, Moon enjoys photographing wildlife and native plants, singing in a choir, cooking for friends and family, drawing, reading, knitting, and lying in a hammock pretending to be plotting the next book. She and her husband subscribe to and read several science and medical journals (since they're not near any academic libraries.) She lives in Florence, Texas, with her husband and son.