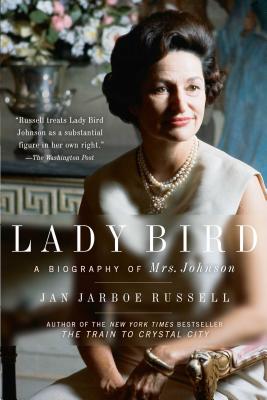 A revealing biography of Lady Bird Johnson exposes startling insights into her marriage to Lyndon Baines Johnson—and her unexpectedly strong impact on his presidency.

Long obscured by her husband’s shadow, Claudia “Lady Bird” Johnson emerges in this first comprehensive biography as a figure of surprising influence and the centering force for LBJ, a man who suffered from extreme mood swings and desperately needed someone to help control his darker impulses.

Expertly researched and written, Lady Bird draws from rare conversations with the former First Lady and from interviews with key members of Johnson’s inner circle of friends, family, and advisers. With chapters such as “Motherless Child,” “A Ten-Week Affair,” and “LBJ’s Midlife Crisis,” Lady Bird sheds light on Mrs. Johnson’s childhood, on her amazing acumen as a businesswoman, and on the central role she played in her husband’s life and political career. A vital link to the Kennedys during LBJ’s uneasy tenure as vice president and a voice of conscience on civil rights, Jan Jarboe Russell reveals Lady Bird as a political force. In this intimate portrait, Russell shows us the private Lady Bird—not only a passionate conservationist but a remarkable woman who greatly influenced her husband, his administration, and the country.

"Jan Jarboe Russell treats Lady Bird Johnson as a substantial figure in her own right rather than merely an appendage to her husband, the president."
—The Washington Post

"This portrait is more than sympathetic: It dramatically portrays Mrs. Johnson not only as the crucial support to the often-impossible LBJ but also as a major player who herself shaped and influenced events."
—Austin American-Statesman

Well-researched and written with prose that moves the reader through the details of life. Captures the emotional complexity of a woman orphaned in childhood, raised by a rich, larger-than-life father and married to a larger-than-life man. —Amarillo Globe - News