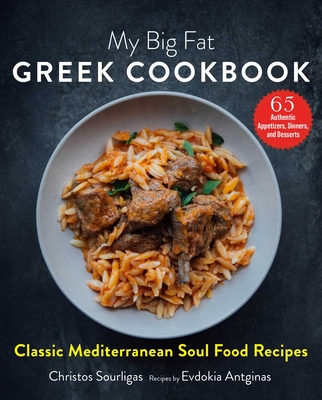 2020 finalist for the prestigious Next Generation Indie Book Awards!

My Big Fat Greek Cookbook is a comprehensive, contemporary overview of Greek food, recipes, and family culture as documented by the son of a Greek immigrant as his mother neared the end of her life. “This Greek eating tragedy has a beginning (appetizer), a middle (main course), and an end (dessert),” Christos shared. “As my Mama is in her final act, it’s fitting that a quarter of her recipes are desserts. Bon appétit! Kali Orexi! (Insert the sound of breaking plates here . . .)”

This is more than just a list of ingredients or series of steps, of course. It’s filled with simple recipes, gorgeous photographs, traditional meals, memories, and tidbits of information that draw family and friends to Greek tables time and again.

It has everything from iconic egg-lemon sauce to rich soups, sweet pies, and traditional delicacies like rabbit stew and octopus with pasta, accompanied by tales of Greek history and insight into cultural nuances. Recipes include:


With stunning photographs throughout and 65 deliciously authentic recipes, this book is a peek into a Greek family that has achieved what so many of us yearn for: a fuller, more meaningful, and joyful life, lived simply and nourished on real, delicious Greek meals that you can access anywhere with this cookbook on hand.

Christos Sourligas is a multiple award-winning film and television writer, director and producer. A storyteller at heart, Christos takes pleasure in entertaining with food, drink and talk. He travels extensively for work and pleasure, often returning with hilarious stories, and of course, several recipes to share. He can also be seen whooping it up on social media. Christos currently resides in Montreal, Canada.

Evdokia Antginas was the proud mom of Christos Sourligas. Evdokia was born in the mountainous region of Arcadia, Greece known for its unspoiled wilderness and idyllic way of life. Having survived through World War II and the devastating Greek Civil War, she always kept her head high while toiling away on factory farms. Having immigrated to Canada in the mid-1960s, she was married for more than fifty years and had four incredible children and four equally-awesome grandchildren. Evdokia felt best at home cooking up Greek and international delights for family and friends alike. She passed away in 2020.

“Christos has captured the essence of Greek home cooking through this collection of his mother’s recipes. An easy-to-read cookbook, emphasizing the simplistic beauty of Greek cuisine.” —Peter Minaki, author of The Big Book of Mediterranean Recipes

“Bravo, Christos. Documenting the treasure trove of recipes in a Greek kitchen isn’t easy, but it’s well worth the effort. I can’t wait to pull up a chair and join the feast!” —Marisa Churchill, Top Chef competitor and author of Sweet & Skinny

“This cookbook is as much about love as it is about food. A love for family, a love for Greek food, and most of all, a love for the author's mother, who expressed her affection for friends and family through her cooking. Food was her language of love, her recipes preserved for all time in this touching tribute.” —JB Macatulad, willflyforfood.net

"Christos shows us how to make healthy and nutritious recipes, including plant-based meals, and quite honestly inspires us all to own our culture and heritage. Greek cuisine is such a powerful way of eating and surely this book will transform us all.” —Maria Koutsogiannis, author of Mindful Vegan Meals, food stylist, photographer and writer for FoodByMaria

“Who doesn’t love Greek food? Years ago, I was invited to Greece to write an article about its cuisine and I had the privilege to stay with a local Greek family. Within five minutes upon my arrival, I was instantly transformed from journalist to family member, and I couldn’t stop eating because everything tasted so good! And that family’s sense of generosity and pride came rushing back to me when I read Christos’s family recipes and memories. The Greeks are masters of simple, accessible, and delicious food. I wish Christos’s mother would invite me over to try her yummy galaktoboureko—sweet and crunchy on the outside, and filled with the perfect custard on the inside!” —Ricardo Larrivée, chef and owner of Cafe Ricardo, host of Ricardo and Friends (Food Network), and author of Vegetables First