Saving Central Park: A History and a Memoir (Hardcover) 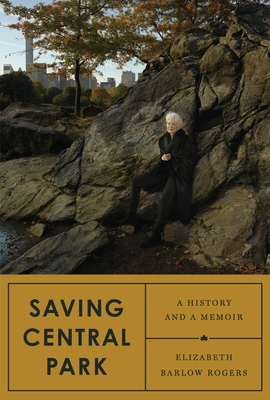 The story of how one woman's long love affair with New York's Central Park led her to organize its rescue from a state of serious decline, returning it to the beautiful place of recreational opportunity and spiritual sustenance that it is today.

Elizabeth Barlow Rogers opens with a quick survey of her early life--a middle-class upbringing in Texas; college at Wellesley, marriage, a master's degree in city planning at Yale. And then her move to New York, where she starts a family and, when she finds being a mother and a housewife is not enough, pours herself into the protection and enhancement of the city's green spaces. Interwoven into her own story is a comprehensive history of Central Park: its design and construction as a scenic masterpiece; the alterations of each succeeding era; the addition of numerous facilities for sports and play; and finally, the "anything goes" phase of the 1960s and 70s, which was often fun but nearly destroyed the park. The two narratives continue to entwine as she finds a job in the administration of Central Park, founds the Central Park Conservancy, and transforms both the park and herself--a transformation that has led to the writing of her many books, to travels that have taken her to parks and gardens around the world, and to solidifying the prestige of one of New York's most conspicuous landmarks.

ELIZABETH BARLOW ROGERS is the president of the Foundation for Landscape Studies and the author of nine previous books, most recently Green Metropolis. She has long been involved in historic landscape preservation and was the first person to hold the title of Central Park Administrator, a position created in 1979. In 1980, she was instrumental in founding the Central Park Conservancy, a public-private partnership supporting the restoration and management of the park. She served in both positions until 1996. A native of San Antonio, Texas, she has made New York her home since 1964.

“Forthright and fascinating . . . Not only a personal memoir but also a concise, anecdotal history of Central Park . . . Passages quoted from her personal journals make vivid the challenges she faced navigating the shoals of city politics and raising private money for restoration projects.” —Barbara Paul Robinson, The Wall Street Journal

“Compelling . . .  The author’s reasonable voice rings clear in this beautifully written memoir, steely resolve beneath old-fashioned courtesy . . . Saving Central Park is not only the story of the recovery of 800 acres of parkland; it is also the story of the rebirth of an idea—Olmsted’s idea that public parks are vital to the American city, not only as recreational retreats but also as democratic public spaces . . . Useful ‘before’ and ‘after’ photographs will remind younger readers, who have never experienced the park except in its current state, of the challenging work that needed to be done . . . One can only hope that Central Park’s future will include individuals as committed and caring as Betsy Barlow Rogers.” —Witold Rybczynski, The Wall Street Journal

“The inspiring story of how one woman, in the face of considerable resistance, created a partnership to privately augment the funding and management of Manhattan’s beloved park.” —The New York Times Book Review

“A moving account of her love affair with urban America’s most renowned green place. [Readers] will be inspired by this absorbing self-told story of a life dedicated to re-creating a Central Park worthy of its name—this magical-again big green space amidst the crowded blocks of tall buildings in one of the world’s greatest cities.” —David Hugh Smith, The Christian Science Monitor

“[An] elegant memoir . . . Rogers’s commitment to urban renewal is evident throughout, and her book reads as a heartfelt plea for people to fulfill their responsibilities to maintain green spaces in the cement jungle.” —Publishers Weekly

“Part history, part memoir, part manifesto on landscape design, the book charts the Central Park Conservancy’s rise, and Rogers’s own. . . . She woos well-heeled donors and tangles with bird-watchers, she transforms from Texas transplant to . . . a woman leading a powerful reform group . . . [But] the book’s true protagonist is the park itself, whose artistic allure Rogers captures with impressive attention to detail . . . Sure to be cherished by nature lovers, city lovers, and civic improvers alike.” —Sam Kling, Booklist

“An inspiring story of . . . how a public-private partnership revitalized Manhattan’s famed park. . . . Besides offering a historical overview, Rogers documents the challenges she faced . . . [and] how by the time she stepped down from her position as Central Park administrator and Conservancy president in 1995, $100 million in private money had been spent guiding and implementing a comprehensive management and restoration plan for the park, which today serves as a model for other cities. . . . Here Rogers explains how effective leadership requires the three Ps—patience, passion, and persistence—as well as power, politics, and the purse.” —Kirkus Reviews