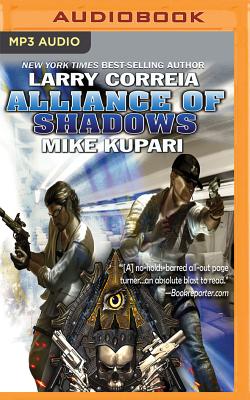 This is book number 3 in the Dead Six series.

Book three in the collaboration between the creator of the multiple New York Times best-selling Monster Hunter series, Larry Correia; and best-selling science fiction author Mike Kupari. The Dead Six series is an inventive and action-packed military adventure series with a touch of conspiracy and a big dollop of descriptive firepower

Europe has spiraled into chaos. A conspiracy years in the making combined with general unrest led to upheaval and revolution. In the midst of the murderous disorder, mercenary Michael Valentine is in Europe with a small team of his Exodus personnel, trying to track down the evil and highly dangerous Katarina Montalban. She has initiated a mysterious plot to do away with those who stand between her and ultimate power. The team is on their own, with few friends and few resources - and racing against the clock. Both Valentine and Lorenzo will have to risk some dangerous alliances if they're to succeed. Meanwhile, Valentine's friend, one-time enemy, and sometime partner, Hector Lorenzo, finds himself in a dungeon owned by Asian drug lord Sala Jihan. He must make a deal that may lead him to cross paths with Valentine again. If two of the most effective killers in existence hunt, even the pandemonium in Europe may be just the first act in an orgy of destruction.