The Legacy of Maggie Dixon: A Leader on the Court and in Life (Hardcover) 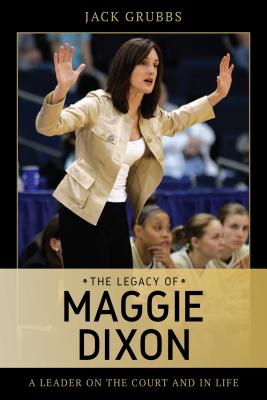 By Jack Grubbs
Email or call for price.
Usually Ships in 1-5 Days

Maggie Dixon, a 28-year-old women's basketball coach at the United States Military Academy, led the West Point team to its first appearance in the NCAA Basketball Tournament. Four weeks later, Maggie died suddenly, leaving behind a devastated family and a group of heartbroken players. Despite their tragic loss, friends, family, and team members took comfort in knowing that the values Maggie instilled in themselves and others would live on. In The Legacy of Maggie Dixon: A Leader on the Court and in Life, Jack Grubbs looks at the remarkable accomplishments of this young woman. Drawing on interviews with Maggie's brother, friends, colleagues, and student players, Grubbs provides an engaging portrait of a woman who achieved the pinnacle in her sport through hard work, determination, and enthusiasm, attributes that continue to inspire those who knew her. In addition to chronicling the events surrounding her golden season at West Point, the book offers a study in the power of inspirational leadership that Maggie embodied. The Legacy of Maggie Dixon captures the wonderful impact she had on those around her in such a short amount of time.

Jack Grubbs enlisted in the United States Army at eighteen and retired thirty-nine years later as a brigadier general. His military assignments included two tours of combat duty in Vietnam, company command in the 82nd Airborne Division, battalion command, and service on the West Point faculty, eventually being selected as Professor and Department Head, Department of Geography and Environmental Engineering. While at West Point, he worked as the "Officer Representative" for soccer and for men's basketball. Since retiring from military service, Grubbs has spoken on the topics of leadership, ethics and team-building to organizations ranging in size from less than twenty to multi-billion dollar corporations. Grubbs has written five books, including Leadership: Taking the High Road and The Voice Heard around the World.