Texas Far and Wide: The Tornado with Eyes, Gettysburg's Last Casualty, the Celestial Skipping Stone and Other Tales (Hardcover) 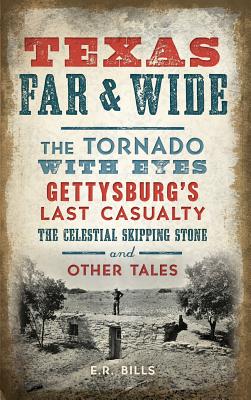 The sheer volume of remarkable Texan exploits creates a dizzying tally for the proudest of its citizens. So it happens that inexplicable marvels slip past an entire state of storytellers and world-famous legends live as anonymous neighbors. Ever hear the story about the escaped ape in the Big Thicket? Or the "Interplanetary Capital of the Universe" that sat on the Gulf Coast? Does the cowboy hat that warmed U.S.-China relations ring a bell? From the Staked Plain Quakers to the Kaiser Burnout, E.R. Bills delves into some of the most fascinating chapters of overlooked Texas lore.

E.R. Bills is a freelance writer and journalist who received a degree in journalism from Texas State University. Born in Fort Worth and raised in Aledo, he is the author of Texas Obscurities: Stories of the Peculiar, Exceptional and Nefarious (The History Press, 2013), The 1910 Slocum Massacre: An Act of Genocide in East Texas (The History Press, 2014) and Black Holocaust: The Paris Horror and a Legacy of Texas Terror (Eakin Press, 2015). His work has appeared in Fort Worth Weekly, Fort Worth Magazine, the Fort Worth Star-Telegram, the Austin American-Statesman and numerous other publications. He also recently co-edited Road Kill: Texas Horror by Texas Writers (Eakin Press, 2016).