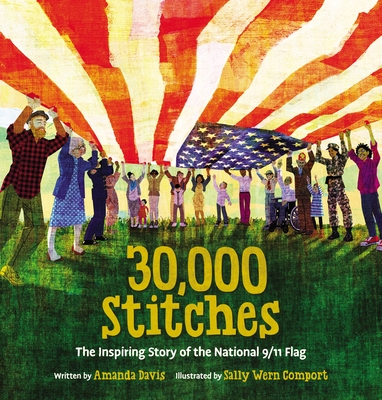 Discover the inspiring story of the American flag that flew over Ground Zero, traveled across all fifty states as it was repaired, and returned to New York as a restored symbol of unity.

In the days following September 11th, a 30-foot American flag hung torn and tattered at 90 West Street, across from Ground Zero. A few weeks later, the flag was taken down by a construction crew and tucked away in storage, where it stayed for nearly seven years.

The flag was brought out of storage in 2008 when the New York Says Thank You Foundation headed to Greensburg, Kansas, a town nearly destroyed by a tornado. NYSTY brought the flag with them, sparking a grassroots restoration effort that traveled over 120,000 miles across all fifty states, bringing together thousands of people, and helping America heal and rebuild . . . hand by hand, thread by thread, one stitch at a time.

This book is the story of that journey, a journey that ended at the opening of the National September 11 Museum, where the flag remains today. Along the way, the flag was restored using pieces of retired flags from every state—including a piece of the flag that Abraham Lincoln was laid on after he was shot at Ford's Theater and threads from the original Star-Spangled Banner flag, which flew at Fort McHenry in the War of 1812 and inspired Francis Scott Key to write the national anthem. The pieces and threads were stitched in by military veterans, first responders, educators, students, community-service heroes, and family members of 9/11 victims, among others. At each stop, communities came together to remember, to heal, and to unite.

Amanda Davis is a teacher, artist, writer, and innovator. Amanda received a B.A. in English and Studio Art from Salve Regina University, and a M.A.T. in Art Education from Tufts University and the School of the Museum of Fine Arts, Boston. She currently teaches art at a public high school in Massachusetts, where writing and reflecting are an integral part of her curriculum. A member of SCBWI, 12x12, and a local critique group, Amanda loves nature, history, dogs, and all things creative. She lives in the Boston area with her partner and rescue pup, Cora.  Sally Wern Comport has been a working artist since her teenage years as an on-staff artist for her father's advertising agency. In addition to her illustration work for newspapers, magazine, and books, Sally co-founded a design firm that creates and installs large-scale works of art in public places. She sees her role as that of visually communicating an idea to engage the viewer in the meaning of the words on the page or the space where they stand. Sally lives in Annapolis, Maryland.


"Davis outlines the flag’s journey through each of the 50 states. . . . Comport adds intricately collaged multimedia spreads so textured they’re almost tangible. . . . [a] nonfiction narrative that effectively informs about a symbol of hope." —Publishers Weekly