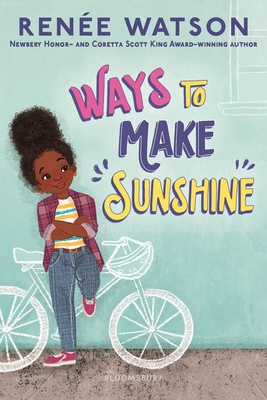 Ryan Hart has a lot on her mind--school, self-image, and especially family. Her dad finally has a new job, but money is tight. That means some changes, like selling their second car and moving into a new (old) house. But Ryan is a girl who knows how to make sunshine out of setbacks. As her brother says when he raps about her, she's got the talent that matters most: it's a talent that can't be seen, she's nice, not mean!

Ryan is all about trying to see the best in people, to be a good daughter, a good sister, a good friend. But even if her life isn't everything she would wish for, when her big brother is infuriating, her parents don't quite understand, and the unexpected happens, she always finds a way forward, with grace and wit. And plenty of sunshine.

Acclaimed author Renée Watson writes her own version of Ramona Quimby, one starring a Black girl and her family, in this start to a charming new series.

Renée Watson is the New York Times bestselling, Newbery Honor Book, and Coretta Scott King Award-winning author of Piecing Me Together, This Side of Home, What Momma Left Me, and Betty Before X, co-written with Ilyasah Shabazz, as well as two acclaimed picture books: A Place Where Hurricanes Happen and Harlem's Little Blackbird, which was nominated for an NAACP Image Award. She is the founder of I, Too, Arts Collective, a nonprofit committed to nurturing underrepresented voices in the creative arts, and currently lives in New York City.
www.reneewatson.net; @reneewauthor

“Intermittently funny, frustrating, and touching. . . . Allows Black readers to see themselves and all readers to find a character they can love. Move over Ramona Quimby, Portland has another neighbor you have to meet!” —Kirkus Reviews, starred review

“Adroitly captures the uncertainty of growing up amid change through the eyes of an irrepressible black girl.” —Publishers Weekly, starred review

“A beautifully rendered series of vignettes à la Beezus and Ramona featuring a Black girl developing into her own personhood, this is a strong start to a new middle-grade series. Ryan Hart is a vivacious child […] with personality and spirit reminiscent of some of the most well-loved heroines in classic juvenile fiction tales.” —Booklist, starred review

“A fresh beginning to a new chapter book series featuring a girl who can coax out sunshine from behind the darkest storm.” —Shelf Awareness, starred review

“This brave new world we're living in sure could use more stories about these bright and imaginative girls who specialize in 'making a way out of no way.'” —The New York Times Book Review

“Middle graders who like realistic fiction will enjoy getting to know this earnest girl and her supportive family.” —School Library Connection

“The theme of loving family and friends even through difficult times will resonate with readers. Cheerful black-and-white illustrations enhance the story and convey Ryan's effervescent personality.” —School Library Journal online

“Watson, with rhythm and style, somehow gets at . . . the life-changing power of voice and opportunity, all wrapped up in Jade.” —Jason Reynolds, author of ALL AMERICAN BOYS on PIECING ME TOGETHER

“An important and deeply moving novel.” —John Green, bestselling and award-winning author of THE FAULT IN OUR STARS on PIECING ME TOGETHER

“Teeming with compassion and insight.” —Publishers Weekly, starred review, on PIECING ME TOGETHER

“A timely, nuanced, and unforgettable story.” —Kirkus Reviews, starred review, on PIECING ME TOGETHER

“A nuanced meditation on race, privilege, and intersectionality.” —SLJ, starred review, on PIECING ME TOGETHER

“Will resonate with many readers.” —BCCB, starred review, on PIECING ME TOGETHER