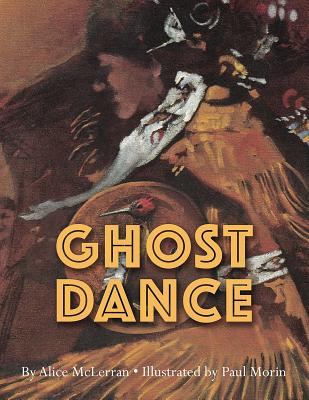 When the bountiful world of their ancestors was no more, the Paiute prophets had visions of a dance that would restore it. The ghost dance movement began in the U.S. in the 1800s, in hope as native peoples came together to dance for their shared dream. The dream failed and they tried again. Again the dream failed tragically. But the vision and the dream still call out to all people, envisioning a future when all Indian peoples would be united, disease would vanish, and the earth would be regenerated and restored.

"McLerran's elegant, spare text begins by describing the result of white settlers' relentless westward movement in the U.S... Paiute visionaries] dreamed that if Native peoples danced, the white people would disappear and the ghosts of the wildlife that had been decimated would return... Attempts at coming together in a sacred, non-violent ceremony ended in violence to the Native Americans, as their actions were interpreted as warlike.] McLerran encourages readers to hold on to the vision of the Dance, and to unite across the boundaries of culture and politics that we have created, to heal the world... Morin's] evocative paintings... glow with the golden colors of the sun-drenched prairie, and exhibit a dramatic use of light... This stunning book will hold great appeal for environmentally conscious readers."
-- School Library Journal on the hardcover edition