William Still and His Freedom Stories: The Father of the Underground Railroad (Hardcover) 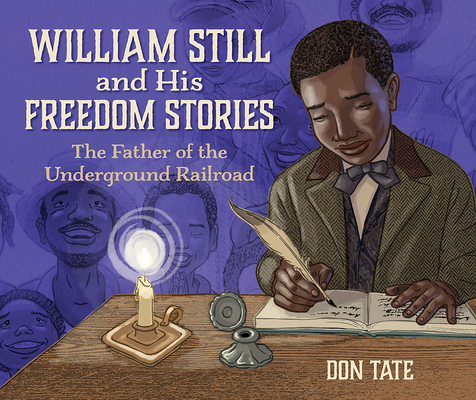 From award-winning author-illustrator Don Tate comes a remarkable picture book biography of William Still, known as Father of the Underground Railroad.
William Still's parents escaped slavery but had to leave two of their children behind, a tragedy that haunted the family. As a young man, William went to work for the Pennsylvania Anti-Slavery Society, where he raised money, planned rescues, and helped freedom seekers who had traveled north. One day, a strangely familiar man came into William's office, searching for information about his long-lost family. Could it be?
Motivated by his own family's experience, William Still began collecting the stories of thousands of other freedom seekers. As a result, he was able to reunite other families and build a remarkable source of information, including encounters with Harriet Tubman, Henry "Box" Brown, and William and Ellen Craft.
Award-winning author-illustrator Don Tate brings to life the incredible, true story of William Still, a man who dedicated his life to recording the stories of enslaved people fleeing to freedom. Tate's powerful words and artwork are sure to inspire young readers in this first-ever picture book biography of the Father of the Underground Railroad.

Don Tate grew up in Des Moines, Iowa, where he learned about Black history at the Center for Study and Application of Black Theology. He grew up to become an author and illustrator of numerous award-winning children's books, including It Jes' Happened: When Bill Traylor Started to Draw and Poet: The Remarkable Story of George Moses Horton, both of received Ezra Jack Keats New Writer Honor awards. He lives in Austin, Texas.

★ "Gentle and straightforward prose. . . The text recounts the oppression and dehumanization of slavery but is not too graphic for the target age demographic. . . . Tate's expressive, colorful illustrations work well with the text to convey this important part of American history. . . . This inspirational true story combines fact with a very readable narrative, spotlighting a pivotal figure in the abolitionist movement. A book that deserves a place on school and public library shelves." —School Library Journal, Starred Review

★ "Tate's sentences are often short, underscoring Still's effort and drive; when they occasionally lengthen, they land with a punch. . . His paintings often likewise play out in vignettes that capture action over time then linger lovingly on the expressive faces of his characters. Brings deserved attention to the life of a man who dedicated himself to recording the lives of others." —Kirkus Reviews, Starred Review

"The digital illustrations portray [Still] effectively from infancy to old age. . . . In this concisely written, informative picture-book biography, Tate introduces a man who deserves to be more widely known." —Booklist

"[A] thorough and informative picture-book biography. . . . Tate's writing style is generally engaging and accessible. Rich acrylic illustrations are perfectly matched with a poetic narrative that celebrates the subject and conveys the realities of the times." —The Horn Book Magazine