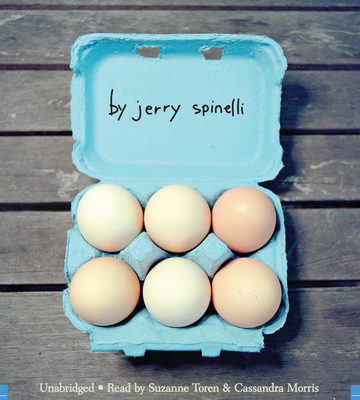 By Cassandra Morris (Read by), Jerry Spinelli, Suzanne Toren (Read by)
Email or call for price.
Out of Print

EGGS is a quirky and moving audiobook about two very complicated, damaged children. David has recently lost his mother to a freak accident, his salesman father is constantly on the road, and he is letting his anger out on his grandmother. Primrose lives with her unstable, childlike, fortuneteller mother, and the only evidence of the father she never knew is a framed picture. Despite their age difference (David is 9, Primrose is 13), they forge a tight yet tumultuous friendship, eventually helping each other deal with what is missing in their lives.

Jerry Spinelli is the author of many immensely popular books for young readers, including Eggs, Stargirl, Space Station Seventh Grade, Newbery Honor Book Wringer, Newbery Award winner Maniac Magee, and the picture books Mama Seeton's Whistle and I Can Be Anything! He lives in Pennsylvania with his wife and fellow author, Eileen.

Nine-year-old David is transplanted from Minnesota to his grandmother's home in Pennsylvania after his mother dies in a freak accident. Thirteen-year-old Primrose moves into an abandoned van because she needs space she can't find in the one-room apartment she shares with her mother. A tumultuous, extraordinarily healing friendship develops when these two damaged children find each other. Spinelli has once again created a satisfying story filled with offbeat yet realistic kids. Suzanne Toren is the perfect narrator, who, with the help of carefully employed sound effects, brings this little world to life in the narrative. Cassandra Morris becomes both David and Primrose, delivering dialogue with superb vocal agility. She moves smoothly from one voice to the other, even through the emotionally charged, fast-paced scenes. N.E.M. Winner of AudioFile Earphones Award © AudioFile 2007, Portland, Maine [Published: OCT/ NOV 07]
—-

Still, this isn't a sentimental sob story, but rather the tale of two quirky, convincing characters for whom readers will come to feel great affection. Beatifully narrated by Toren (the adults and the narrative) and Morris (David and Primrose), this is Spinalli at his best- in -sightful, fnny, and daring, Moris's narration of both kis is perfectly pitched, giving the story a fresh energy and vibrancy.
—KLIATT

Unfortunately, the story, though filled with quirky exploits, doesn't ever lift off. Morris, who voices both children, is not as convincing in the male role. The two-person-cast approach is clunky and not very effective here, and David and Primrose's frequent bickering and teasing, as well as David's excessive coldness toward his grandmother, grow tiresome.
—-