Hail of Fire: A Man and His Family Face Natural Disaster (Paperback) 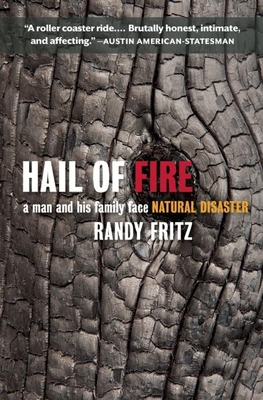 Every year people watch in shock as homes are destroyed and communities devastated by natural disasters. As the media arrives, the information that is reported is mainly statistical. The horror of living through and recovering from the experience is rarely told because almost no one has the emotional strength to speak out while the smoke is still in the air or the floodwaters are still receding. The stories of a disaster's most important effects--which unfold slowly and invisibly for months and sometimes years--are never told. That is, until now. Hail of Fire: A Man and His Family Face Natural Disaster is an intimate account of the third worst wildfire in modern U.S. history, and the most destructive in the history of Texas. It is a memoir about what happened to Randy Fritz, an artist turned turned public policy leader, and his family during and after, combining a searing account of the fire as it grew to apocalyptic strength with universal themes of loss, grief, and the rebuilding of one's life after a calamitous event. The wildfire itself was traumatic to those who witnessed it and suffered its immediate aftermath. But the most significant impact came in the months and years following, as families grieved, struggled to adapt to a their new world, and accepted the destruction of an iconic forest of internationally acclaimed natural beauty--the Lost Pines. Neighbors once close worried about or could not find one another, while others discovered new friendships that transcended the boundaries of race, class, and family lineage. Fritz, a man who previously held the highest elective office in his community, struggled as his wife, Holly, and their youngest daughter, Miranda, tried to make sense of their losses. He never imagined the impact this disaster would have on them individually and as a family, as well as the emotional toll he would pay and the journey to make sense of it all. While natural disasters seem increasingly common, deeply personal and redemptive accounts of them are less so. Hail of Fire is an unflinching story of how a man and his tight-knit family found grace after a wildfire took everything. Fritz's hard-won insights provide inspiration to anyone with a quest to figure out what truly matters, particularly those who have undergone an unexpected and life-changing event and those who love and care for them.

Randy Fritz is the former chief operating officer of the Texas Department of State Health Services, the state's public and mental health agency. He helped coordinate the state's response to Hurricanes Katrina and Rita and led the team that implemented the Children's Health Insurance Program in Texas. Fritz lives in Bastrop, Texas, with his wife, Holly, and their youngest daughter, Miranda.