Love Deeper Than a River: My Life in San Antonio (Hardcover) 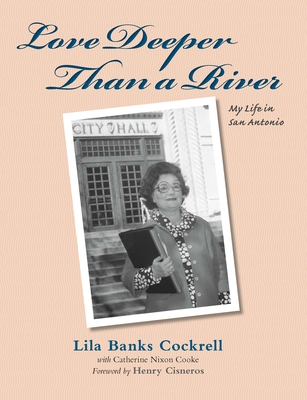 By Lila Banks Cockrell, Catherine Nixon Cooke (With), Henry Cisneros (Foreword by)
Email or call for price.
Out of Print

Lila Banks Cockrell has been an important voice in San Antonio politics and public life for more than six decades. In Love Deeper Than a River, she recalls her life as a public servant in the city she loves and, as member of the Greatest Generation, recounts how coming of age during Prohibition, the Great Depression, World War II, and the burgeoning civil rights movement influenced her political views and kindled her passion to serve her country and community. Love Deeper Than a River details the era of Cockrell's life that many San Antonians are familiar with, including her four terms as the first woman mayor of San Antonio, between 1975 and 1991, and her service on countless municipal commissions, civic boards, foundations, and conservancies in the 1990s and into the early twenty-first century. Her life stands as an inspiration for everyone, including new generations of civic leaders.

Lila Banks Cockrell (1922-2019) served three terms on San Antonio's city council, followed by four terms as mayor. She is a graduate of Southern Methodist University and holds several honorary degrees. She served as an ensign in the WAVES and later as president of the League of Women Voters in Dallas and San Antonio, executive director of United San Antonio, chair of the San Antonio River Oversight Committee, executive director of the San Antonio Parks Foundation, and in many other civic positions. In addition to her achievements in public life, she cherished her role as wife, mother, and grandmother.