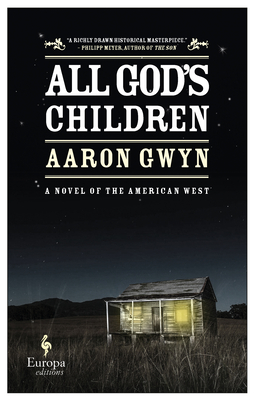 Finalist for the Reading the West Book Award for Fiction

A novel about the remarkable people living on the edge of freedom and slavery, All God's Children brings to life the paradoxes of the American frontier - a place of liberty and bondage, wild equality, and cruel injustice.

In 1827, Duncan Lammons, a disgraced young man from Kentucky, sets out to join the American army in the province of Texas, hoping that here he may live - and love - as he pleases. That same year, Cecelia, a young slave in Virginia, runs away for the first time.

Soon infamous for her escape attempts, Cecelia drifts through the reality of slavery - until she encounters frontiersman Sam Fisk, who rescues her from a slave auction in New Orleans.

In spite of her mistrust, Cecelia senses an opportunity for freedom, and travels with Sam to Texas, where he has a homestead. In this new territory, where the law is an instrument for the cruel and the wealthy, they begin an unlikely life together, unaware that their fates are intertwined with those of Sam's former army mates including Duncan Lammons, a friend - and others who harbor dangerous dreams of their own.

This novel will take its place among the great stories that recount the country's fight for freedom - one that makes us want to keep on with the struggle.

Aaron Gwyn is the author of three novels. His fiction has appeared in his story collection Dog on the Cross, finalist for the New York Public Library's Young Lions Fiction Award; and numerous magazines and anthologies such as Esquire, McSweeney's, Best of the West, and Every True Pleasure: LGBTQ Tales of North Carolina. He is associate professor of English at the University of North Carolina-Charlotte, where he teaches fiction writing and American literature.