America, We Need to Talk: A Self-Help Book for the Nation (Paperback) 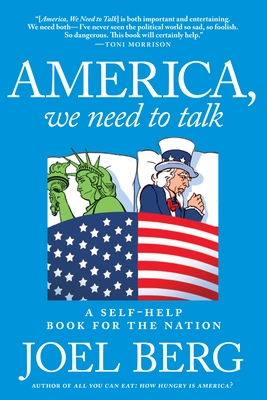 By Joel Berg
Email or call for price.
Special Order

How did we get here, America? How did our relationship get so broken? And where do we go now? Starting with the premise that Americans' most important relationship is with their nation, Joel Berg’s second book, America We Need to Talk: A Self-Help Book for the Nation, makes a case for how we must both stop blaming the nation’s problems solely on “the politicians” or “the system” and take personal responsibility to solve them. Written as both a hilarious parody of relationship and self-help books and a deadly serious analysis of the nation's political and economic dysfunction, the book dissects how Donald Trump and other Republicans won over white, working-class voters, and includes a concrete plan to win them back, and well as a broader roadmap for reducing poverty, bolstering the middle class, and powering an overall progressive resurgence.

As an acclaimed author, a frequent voice in the national media, and the outspoken CEO of the nonprofit group Hunger Free America, Joel Berg is a respected international leader in the fields of hunger, poverty, food, and US politics. Through his biting critique, clear-headed prescriptions, and amusing charts—this book shows how average Joes and Janes can channel their anger at our hobbled government into concrete actions that will fix our democracy, make our economy work for everyone, and restore our stature in the world as a beacon of freedom, diversity, and hope. The American people are in it for the long haul, and, as in all relationships, both sides must recognize their issues and work together to fix them. This book will do more than offer comfort for sobbing progressives—it will show the path to redemption.

Labeled “Mister Frowny Pants” by The Daily Show with Jon Stewart (on which he once appeared), JOEL BERG is the CEO of Hunger Free America, which the Nation called “one of the leading direct service and advocacy organizations on hunger and poverty in the nation.”
Berg wrote the decade’s definitive book on US hunger, All You Can Eat: How Hungry Is America? (Seven Stories Press, 2008). Playboy (which Berg reads only for the reviews) called the book “refreshing” for its “optimism . . . rationality and passion.” Berg has also published numerous op-eds, poems, and policy papers and was a Senior Fellow at the Center for American Progress and a Policy Analyst at the Progressive Policy Institute, two DC-based think tanks.
Berg has delivered hundreds of keynote speeches on four continents and in thirty-seven states, from Maine to Alaska, while surviving moose attacks and volcanic eruptions. One audience member wrote, “Seeing Joel Berg speak in person is like watching the History Channel, C-Span, and Comedy Central all at once.”
Noted by City Limits magazine for his “trademark good-natured snarkiness,” Berg has been covered extensively by national and international media, appearing on Hardball with Chris Matthews, Fox News, CNN, National Public Radio, The Kudlow Report, All In with Chris Hayes, and the NBC Evening News, and quoted by the New York Times, the Wall Street Journal, the Washington Post, and tons of obscure blogs. Berg has also been featured in three documentary films.
Prior to joining Hunger Free America, Berg worked for eight years in senior executive service positions in Bill Clinton’s presidential administration, served on the Clinton/Gore Presidential Transition Team, and staffed the 1992 Bill Clinton for President campaign. While working for 13 years as a political campaign professional, Berg lived in Kansas, Alaska, New Jersey, Maine, Arkansas, and New York.
He now resides in Brooklyn, New York but has yet to overdose on local, artisanal kale chips.

“It is both important and entertaining. We need both—I've never seen the political world so sad, so foolish. So dangerous. This book will certainly help.“ —Toni Morrison

“Joel Berg has done it again with another book to challenge policy makers and Americans to think boldly and creatively about how to solve some of the biggest issues facing our nation. Joel won’t rest until we end hunger and poverty once and for all. And, quite frankly, we need more people like him.” —Congressman Jim McGovern (D-MA)

“In AMERCA WE NEED TO TALK: A SELF HELP BOOK FOR THE NATION, Joel Berg combines wit, dogged research, and insight based on decades of on-the-ground experience to drill down deeply on issues vital to all Americans.  His call for more civility in our modern public discourse, as well as his proposals  for wholesale social change based on centrist  policies and mainstream values, deserve particular attention.  While we may not concur on all his critiques and solutions, we surely should agree that the issues he raises demand wide-spread consideration and debate.” —Dan Glickman, former U.S. Secretary of Agriculture and U.S. Congressman

“Fearless and compulsively readable,   America, We Need to Talk will make you laugh, think and snort coffee through your nose. Joel Berg is that irascible uncle who speaks the unmentionable truth at family dinners. You may squirm, but secretly you’re glad he’s there.”  —Lori Silverbush filmmaker, activist