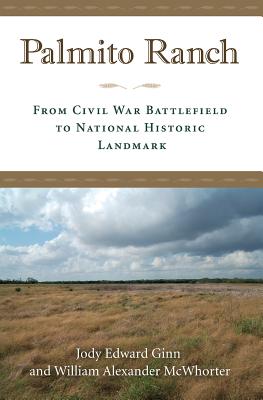 Despite the strategic importance of the Lower Rio Grande Valley during the Civil War, the two battles fought there—the first (September 1864) and the second (May 1865) battles of Palmito Ranch—have largely faded from public memory even as the second battle earned the title “Last Land Battle of the Civil War.” In Palmito Ranch: From Civil War Battlefield to National Historic Landmark, Jody Edward Ginn and William Alexander McWhorter document efforts to redress this lacuna in the popular consciousness. They offer new information about these battles while chronicling the efforts to save and preserve the battlefield site, one of the few places in Texas where the war was contested.

Opening with a crisp retelling of the principal military events that unfolded at Palmito Ranch, near the Confederate port city of Brownsville, Ginn and McWhorter recount the initiative pursued by a multidisciplinary team organized largely through the efforts of the Texas Historical Commission to study, document, and preserve this important Texas historic site. Now, visitors to the area may benefit from not only improved and expanded historical markers, but also a radio transmitter and a viewing platform, along with other interpretive aids. All this is due to the campaign spearheaded by McWhorter, Ginn, and a cohort of dedicated volunteers and professionals.

JODY EDWARD GINN was the 2001 and 2002 winner of the Texas State Historical Association’s Fred White Jr. Research Fellowship in Texas History. He is an adjunct associate professor of history and a media consultant who lives in Austin. WILLIAM ALEXANDER MCWHORTER is the former executive director of the Texas Holocaust and Genocide Commission. Previously he served as military historian at the Texas Historical Commission. He resides in Kyle, Texas.

“This volume is a wonderful new tool for raising public awareness and appreciation of the Palmito Ranch landmark and the history behind it. In addition to constructing a narrative appealing to new readers, authors Ginn and McWhorter offer fresh insights and information that those familiar with the existing literature should well appreciate. The book also represents another example of the indispensable importance in historical preservation of public and private resources and teamwork. Finally, the volume very effectively advances the notion that Palmito Ranch is deserving of a higher legacy than simply being the answer to a common Civil War trivia question. As a part of this, its narrative of events dovetails usefully with elements of the growing and influential North American borderlands scholarship. Highly recommended.” —Civil War Books and Authors
— Civil War Books and Authors

“It is obvious throughout this book that the authors have done their homework, care deeply about their subject matter, and are themselves part of the story they tell. Helpful maps and marvelous photographs enhance and reinforce their story, each offering its own fascinating glimpse into the battlefield’s history. The book is visually compelling and beautifully printed on high-quality paper, which makes it feel like a hardback rather than the paperback it is. For anyone interested in the Palmito Ranch battles, interpretation of the site, or preservation efforts in general, this is a must read.”—Southwestern Historical Quarterly
— Southwestern Historical Quarterly