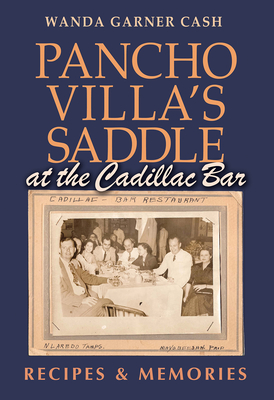 In 1924, Achilles Mehault “Mayo” Bessan and his eighteen-year-old bride journeyed from New Orleans to Mexico, where he ultimately transformed a dirt-floored cantina in Nuevo Laredo into a bar and restaurant renowned across the United States for its fine seafood and fancy cocktails. The Cadillac Bar built a reputation as one of the finest eateries and watering holes in the Southwest, even surviving a 1954 flood that devastated cities on both sides of the Rio Grande. Its history sprawls across more than a half-century and its food and drink drew inspiration from the culinary traditions of southern Louisiana, from pre-Prohibition New Orleans, and from the dusty border towns that straddle the Rio Grande in far South Texas.

In her introduction, author Wanda Garner Cash writes, “I grew up behind the bar: first child and first grandchild. I spoke Spanish before I spoke English and I learned my numbers counting coins at my grandfather’s desk . . . I rode Pancho Villa’s saddle on a sawhorse in the main dining room, with a toy six-shooter in my holster. I fed the monkeys and parrots my grandfather kept in the Cadillac’s parking lot.” Readers will find themselves drawn to a different, more languid time: when Laredo society matrons passed long afternoons in the bar, sipping Ramos Gin Fizzes; when fraternity miscreants slouched into the Cadillac to recover from adventures “South of the Border”; when tourists waited in long lines for 40-cent tequila sours and plates of chicken envueltos.

Step into the Cadillac Bar and take a seat. You’ll want to stay awhile.

WANDA GARNER CASH is the daughter of Porter Garner Jr., a 1945 graduate of Texas A&M who ran the Cadillac Bar from 1946 until 1979. Cash is the former president of the Texas Press Association and Fellow of the F. Griffin Singer Professorship in Journalism at the University of Texas. The 2016 winner of the James Madison Award presented by the Freedom of Information Foundation, she is also the coauthor of The News in Texas and other books. She lives in Ingram, Texas.