We Are Still Here!: Native American Truths Everyone Should Know (Hardcover) 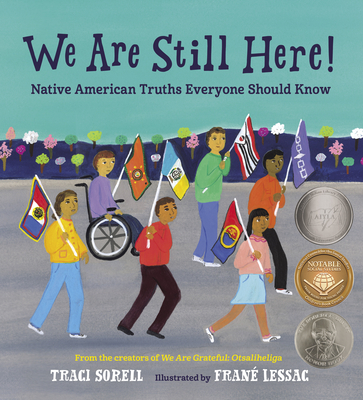 Twelve Native American kids present historical and contemporary laws, policies, struggles, and victories in Native life, each with a powerful refrain: We are still here!

Traci Sorell is the award-winning author of We Are Grateful: Otsaliheliga, a Sibert, Orbis Pictus, and Boston Globe-Horn Book honor book; At the Mountain's Base; and co-wrote Indian No More. She is an enrolled citizen of the Cherokee Nation and lives in Oklahoma, where her tribe is located.

Frané Lessac is the award-winning illustrator of We Are Grateful: Otsaliheliga, a Sibert, Orbis Pictus, and Boston Globe-Horn Book honor book, and more than forty other books for children. She has lived on the small Caribbean island of Montserrat, in London, and in Australia, and her work has taken her on many adventures in numerous countries. www.franelessac.com

♦ Students at the Native Nations Community School share presentations about the history, present, and future of Indigenous communities. The vivid artwork features a simple, bold style. The narrative starts with a general introduction of Native Nations in the United States. Each presentation contains illustrations with the student’s name, an overview of the subject, a brief list of the impact that the concept or historical moment had on Native American people, and the refrain “We Are Still Here!” The last pages show students and their families with a variety of skin tones and physical abilities studying the presentations on topics that include sovereign rights and relocation. Additional information, a time line, a glossary, sources, and an author’s note offer further context. The lyrical text and jewel-tone illustrations elegantly work together to stirringly portray the ongoing fight for Native American recognition and rights. VERDICT An essential purchase for introducing the impact laws and treaties had and continue to have on Native Nations.
—School Library Journal, starred review

♦ In this meticulously researched nonfiction picture book, Sibert honorees Sorell and Lessac team up once again to answer this question: What has happened to Native Nations and their citizens after the treaties with the U.S. government ended in 1871?
Lessac’s trademark colorful, folk-art–style illustrations show a Native American community school with a classroom of diverse students preparing for presentations at the Indigenous People’s Day assembly. Spread by spread, each child speaks, featured words and terms highlighting the journey Native Nations have taken to reclaim their land and rights. They show why Indigenous people say, “We are still here!” In the “Assimilation” presentation, Native children are dressed in militarylike uniforms, showing how U.S. leaders used schooling to destroy Native traditions. Dividing plots of tribal land for “Allottment” left much treaty land open for public sale. With “Termination” and “Relocation,” Native people were encouraged to leave their tribal lands and “act more like white people.” But Indigenous people say, “We are still here!” and the narrative arc turns to emphasize resilience. When activists speak up and organize, it strengthens tribal sovereignty. The tribes “protect and provide for future generations” by holding on to their traditional ceremonies, opening businesses to support their tribal members, and reviving their tribal languages. The illustrations, too, change their tenor, modulating from historical wrongs to emphasize contemporary strength, community, and joy.
An emphatic, triumphant declaration: “WE ARE STILL HERE!”
—Kirkus Reviews, starred review

♦ The creators of We Are Grateful: Otsaliheliga (2018) here share important Native American concepts for younger readers. Using a framework of students giving presentations for an Indigenous Peoples’ Day celebration, Sorell and Lessac devote a two-page spread to each report topic: “Assimilation,” “Allotment,” “The Indian New Deal,” “Termination,” “Relocation,” “Tribal Activism,” “Self-Determination,” “Indian Child Welfare and Education,” “Economic Development,” “Language Revival,” and “Sovereign Resurgence.” For each, they define, offer examples of its use (often to the disadvantage of Indigenous peoples), and conclude with the refrain “We are still here!” “Allotment,” for example, explains how the U.S. government passed laws that assigned small sections of land to tribal citizens and sold the “leftover” land to white Americans and the railroads; “Relocation” describes the government’s encouragement of Indigenous peoples leaving tribal lands to resettle in cities, which resulted in many living in urban poverty. Lessac’s vibrant gouache illustrations include many historic scenes, including of the Carlisle Indian Industrial School, the occupation of Alcatraz Island, arguments before the Supreme Court to challenge policies that prohibited traditional religious practices, and efforts to strengthen tribal languages. Appended with further information, a time line, a glossary, and sources, this makes a perfect introduction for those too young for Roxanne Dunbar-Ortiz, Debbie Reese, and Jean Mendoza’s An Indigenous Peoples’ History of the United States for Young People (2019).
—Booklist, starred review

♦ In this informational picture book by the team behind We Are Grateful: Otsaliheliga, a diverse group of students and families are headed to (the fictional) Native Nations Community School for Indigenous People's Day presentations. Each spread depicts a different student's report on a subject significant to Native people's experience since the late 1800s. Topics include assimilation, allotment, termination, language revival, and more; although these are dense and complex areas, Sorell makes them comprehensible for readers through the book's unique format. Each classmate's "presentation" includes a brief summary or definition ("Assimilation: Most U.S. leaders did not resoect our ways and thought it would be better for us to adopt their beliefs and practices") with a handful of supporting details. Every presentation concludes iwth the line: "We are still here!" Warm gouache illustrtions help support the historical context while personalizing the contemporary setting. This book provies information that is omitted from most curricula ("most people do not know what happened to Native Nations and our citizens after treaty making stopped in 1871") in an easy-to-understand manner. Above all, the message is reinforced for all readers: Native people are still here.
—The Horn Book, starred review

♦ Students celebrating Indigenous Peoples' Day explore 12 challenges currently facing Native nations in Traci Sorell and Frané Lessac's impassioned and informative follow-up to We Are Grateful: Otsaliheliga.
We Are Still Here!, for ages 7-10, is framed as a dozen first-person school reports written by fictional children who highlight ways in which Native communities have responded to devastation wrought by federal treaty-making. Each concept, spanning regions and with tribal specificity, fills a double-page spread. Historical scenes, such as "Assimilation" and "Allotment," evolve into modern themes including "Religious Freedom" and "Language Revival." Collectively, the reports showcase self-determination and the continuous agency of Native Nations despite efforts by the federal government to curtail sovereignty: "Despite the continued occupation of our homelands... and being mostly forgotten in US culture, Native Nations all say, 'We are still here!' "

Sorell (At the Mountain's Base), an enrolled citizen of the Cherokee Nation, honors the vibrant contributions of many Native Nations with her careful research. Lessac (Under the Milky Way), in her signature gouache folk-art style, depicts culture and communities rooted in historical events and real locations, and features citizens with a wide range of skin tones and relationships. The presentation format of the text allows Sorell to introduce sophisticated concepts while leaving more complicated topics to her thorough backmatter. A timeline begins with the end of treaty-making in 1871, and additional material invites readers to delve more deeply. Native Nations have struggled and survived, and the successful reunion of this creative pair delivers an empowering affirmation of resilient communities.
Discover: The award-winning duo behind We Are Grateful: Otsaliheliga reunites with an affirming celebration of contemporary Indigenous citizens.—Shelf Awareness for Readers, starred review

We Are Still Here: Native American Truths Everyone Should Know, by Traci Sorell and Frané Lessac (creators of We Are Grateful: Otsaliheliga), successfully illuminates a tremendous amount of historical information in an engaging, classroom framework. Each fictionalized student presents on a topic—such as Tribal Activism, Indian Child Welfare & Education, Language Revival—that is relevant to the historical and present lives of Native American communities. Coupling the atrocities of history with the fortitude of Native Nations, who say "We are still here!," and vibrant illustrations, the book presents honest history in ways that early elementary and middle grade readers can comprehend. Using the framework of a presentation night helps young readers contextualize the book as both educational and interactive. Readers inspired to learn more can start with the back matter, which contains more information on each topic, a time line, glossary of terms, sources, and an author's note. A wonderful addition to all school and classroom libraries, We Are Still Here is a beautiful, informative, must-have book for any bookstore!
—Sara Hines, Eight Cousins Bookstore, Falmouth, MA