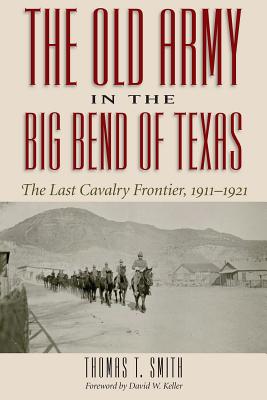 By Thomas Ty Smith
Email or call for price.
Hard to Find

Even before Pancho Villa’s 1916 raid on Columbus, New Mexico, and the following punitive expedition under General John J. Pershing, the U.S. Army was strengthening its presence on the southwestern border in response to the Mexican Revolution of 1910. Manning forty-one small outposts along a three-hundred mile stretch of the Rio Grande region, the army remained for a decade, rotating eighteen different regiments, primarily cavalry, until the return of relative calm. The remote, rugged, and desolate terrain of the Big Bend defied even the technological advances of World War I, and it remained very much a cavalry and pack mule operation until the outposts were finally withdrawn in 1921.

With The Old Army in the Big Bend of Texas: The Last Cavalry Frontier, 1911–1921, Thomas T. “Ty” Smith, one of Texas’s leading military historians, has delved deep into the records of the U.S. Army to provide an authoritative portrait, richly complemented by many photos published here for the first time, of the final era of soldiers on horseback in the American West.

"Anyone interested in the regular army, the history of the Big Bend, early twentieth-century Texas and the southwestern borderlands, the Texas National Guard, and U. S.-Mexico relations during the period will find this work essential."--Robert Wooster, author of The American Military Frontiers: The United States Army in the West, 1783-1900.