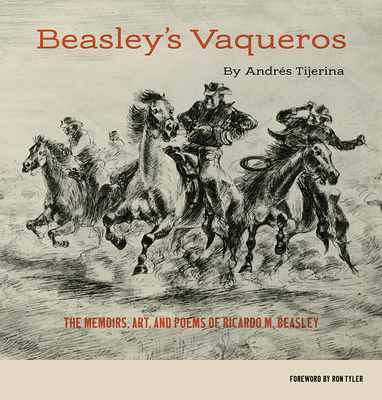 Beasley’s Vaqueros presents the life and work of South Texas artist Ricardo M. Beasley. Between roughly 1940 and 1980, Beasley produced dozens of pen-and-ink drawings of working vaqueros, the Tejano cowboys of South Texas. His vibrant, action-packed scenes capture the dangers as well as the joys of working with cattle, horses, and an often unforgiving landscape of cactus and mesquite. In addition to a selection of Beasley’s work, historian Andrés Tijerina has collected and translated an extensive interview with the artist and several of his poems. Despite having lived much of his life after World War II, Beasley’s art and words capture a world in which people and events from decades before his time are just as immediate—perhaps even more so—than events of the present day. More than just a testament to the talents of a singular, self-taught artist, Beasley’s Vaqueros is a record of vaquero life in South Texas that spans the centuries.