Plague: One Scientist's Intrepid Search for the Truth about Human Retroviruses and Chronic Fatigue Syndrome (ME/CFS), Autism, and Other Diseases (Hardcover) 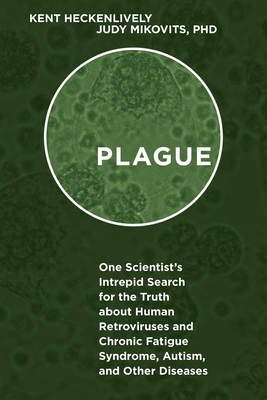 On July 22, 2009, a special meeting was held with twenty-four leading scientists at the National Institutes of Health to discuss early findings that a newly discovered retrovirus was linked to chronic fatigue syndrome (CFS), prostate cancer, lymphoma, and eventually neurodevelopmental disorders in children. When Dr. Judy Mikovits finished her presentation the room was silent for a moment, then one of the scientists said, “Oh my God!” The resulting investigation would be like no other in science.

For Dr. Mikovits, a twenty-year veteran of the National Cancer Institute, this was the midpoint of a five-year journey that would start with the founding of the Whittemore-Peterson Institute for Neuro-Immune Disease at the University of Nevada, Reno, and end with her as a witness for the federal government against her former employer, Harvey Whittemore, for illegal campaign contributions to Senate Majority Leader Harry Reid.

On this journey Dr. Mikovits would face the scientific prejudices against CFS, wander into the minefield that is autism, and through it all struggle to maintain her faith in God and the profession to which she had dedicated her life. This is a story for anybody interested in the peril and promise of science at the very highest levels in our country.

Kent Heckenlively is a former attorney, a founding editor of Age of Autism, and a science teacher. During college Heckenlively worked for US Senator Pete Wilson, and in law school he was a writer and an editor of the school’s law review and spent his summers working for the US Attorney’s Office in San Francisco. Kent and his wife Linda live in Northern California with their two children, Jacqueline and Ben.

Judy Mikovits, PhD, spent twenty years at the National Cancer Institute, working with Dr. Frank Ruscetti, one of the founding fathers of human retrovirology, and has coauthored more than forty scientific papers. For five years she was the research director of the Whittemore-Peterson Institute for Neuro-Immune Disease. Dr. Mikovits lives in Southern California with her husband, David.